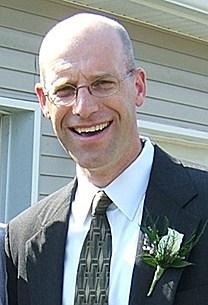 "Several of (Dave) Galle’s teammates and his coach from his days playing basketball at DePauw University were talking after his funeral and thought about a way to honor the longtime Columbus resident," reports the Columbus Republic. "They came up with the Dave Galle Memorial Golf Classic, which will be Monday at Otter Creek."

David M. Galle, a 1987 graduate of DePauw, died last August of an autoimmune blood disorder. Jim Sandgren '88, a DePauw teammate of Dave Galle, says of the idea for the golf tournament, "It was a group of guys after the funeral that we hadn’t seen in years, including coach (Mike) Steele. We started talking about how we could memorialize David and his legacy. We started talking that day, and from there it kind of evolved, and we’re excited about the tournament." 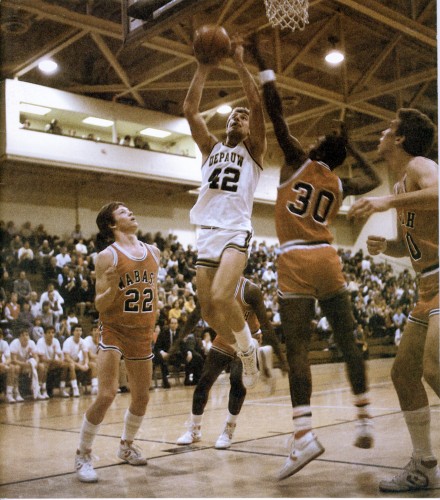 he earned a M.B.A from Northwestern's J. L. Kellogg Graduate School of Management in 1991. Galle was inducted into the DePauw Athletic Hall of Fame in 2006.

"He was just really the best," says his Tiger coach, Mike Steele. "He was a great player. He was a great teammate, one of the easiest guys I’ve ever had an opportunity to coach." (at left: Galle, #42, goes up for a layup versus Wabash College)

"His passion was early childhood development," notes Sandgren. "It’s all about supporting Dave’s dream for both public and private education, regardless of their ability to pay." 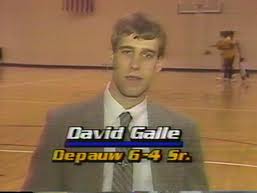 Steele adds, "What we really need in sports are more David Galles. He always gave 100 percent in practice, and he was a great player for us. If you were going to have the epitome of what you wanted in a student-athlete, it was David Galle. I don’t know of anyone that’s ever met David Galle that’s ever had a bad thing to say about him, and that’s pretty neat."

Dave Galle was interviewed by an Indianapolis television station in 1987.  The video is embedded below.