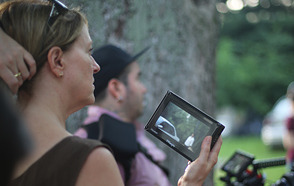 A Tibetan monk on a quest to find the reincarnation of his dead teacher is the basis of Mud Lotus, a short film shot recently in rural Greencastle, written and directed by Chris White, associate professor of English, and co-produced and edited by Jonathan Nichols-Pethick, associate professor of communication and theatre. The two professors are collaborating in roles new to both of them. Nichols-Pethick’s production experience is in television news, and, while White has experience in writing and directing for the stage and in writing screenplays, she is a novice at directing and producing a film.

White began writing the story more than a decade ago while she was a graduate student and recently divorced. “I was full of a sort of emotional violence – both feeling it in myself and feeling it had been inflicted upon me. Life was very ragged, and there was a lot of suffering. Meanwhile, Buddhism was coming into my life in a very full way. I was having these very different influences in my life, and I thought what if those two forces came together in a story – a profane selfish couple, and this way to look at suffering to ease it.”

The story is about Nawang, a Tibetan monk, who comes to Indiana after following signs and the advising of lamas to this part of the world in search of the reincarnation of his late teacher. Nawang feels a little responsible for the death of his beloved teacher, and though he didn’t do anything to cause his death, he stood by passively as his teacher was murdered. Nawang goes to a farmhouse in the country and finds a warring couple and their 10-year-old asthmatic daughter and comes to believe that the daughter is the reincarnation – the tulku. 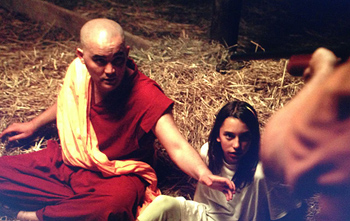 The character of the monk was inspired by Tibetan composer and flutist Nawang Khechog. White, also a musician, performed with him years ago on several albums. “Nawang has been a very inspiring presence for me,” White explains. “This character is sort of based on him. The story I told in the film is not technically his story, but certain aspects of his life were really moving. Fleeing from Tibet during the Chinese invasion; going to Dharamsala and coming to find the Dalai Lama as his teacher; and eventually traveling with the Dalai Lama all over the world." 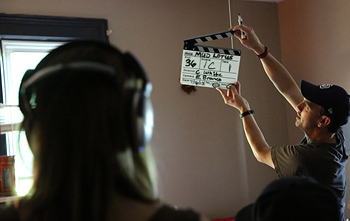 “We didn’t actually produce a trailer, but we began thinking about what it would take to make, how would we go about it and began doing the work to accomplish that,” White says. The grant allowed them to buy equipment and produce a short scene with two actors. “What we learned is that it’s harder to do than you think,” Nichols-Pethick says (at right). “We actually produced a nice scene, but it wasn’t quite the right tone.”

The process led them to decide that what they really wanted to do was to make a short film. “We wanted to have something in our hands that was complete when we finished rather than just produce a trailer that doesn’t really tell a story,” Nichols-Pethick says.

White edited the 80-page screenplay to 21 pages – getting ridding of characters and subplots. “I’ve never written a short film before,” White says. “I’ve written a number of full-length screenplays. It’s like being used to writing novels, and then having to write a really tight short story.”

“As we began to think about the filmmaking process, there were a lot of things we thought we could just do,” Nichols-Pethick says. “We soon realized there’s a whole layer that professionals really need to do.” It didn’t take long before they had built an impressive cast and crew. “We had a lot of people say yes,” White says. “That speaks a lot to the script and how good it is,” Nichols-Pethick adds. “It also speaks a lot to the people we’re working with that they’re willing to do this. To me, that’s the important part. We’re thrilled with the people we get to hang out with.” 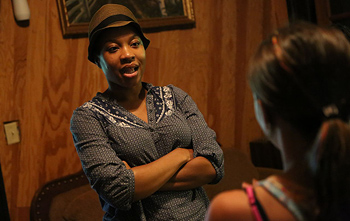 “We’ve had a lot of good luck, a lot of goodwill and a lot of good people, which has been the key so far,” White says. Both Nichols-Pethick and White were delighted when Chinonye Chukwu '07 (at left) agreed to be White’s first assistant director – gratis – in the middle of her own project – directing A Long Walk, a screenplay adaptation based on work by Assistant Professor of English Samuel Autman. “Chinonye brings a lot of experience to our project,” Nichols-Pethick says. She also introduced them to Eric Branco, whom they hired as director of photography.

Nichols-Pethick is in the middle of the editing process and admits it's daunting working with digital equipment that's emerged over the years since he's worked professionally in production. “The camera produces images that are gorgeous, but it has really large files that need to be maintained,” he says. “So, there are a lot of technical challenges, and I am learning a whole new way of doing things.” 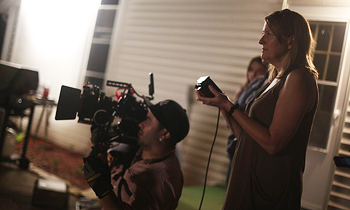 Nichols-Pethick and White will submit Mud Lotus to festivals, the market for short films. “You hope to get exposure, and you hope ultimately that somebody will be interested in financing a feature length film or another short film,” White says.

“Our initial goal is to finish it and make it a beautiful film,” Nichols-Pethick says. “I don’t want it to be a stepping stone. I want it to be something that on its own is a great thing. Hopefully, then it will also lead to other things.”

The film will premiere during ArtsFest 2013: Art & the Quest on Nov. 7 at 8:30 p.m. in Watson Forum in the Pulliam Center for Contemporary Media. Prior to the showing, Grammy-Nominee Flutist Nawang Khechog will perform a Tibetan Music Concert at 7:30 in Thompson Recital Hall in the Judson and Joyce Green Center for the Performing Arts.

On Nov. 8 at 4:15 p.m., Khechog will present a workshop titled, Awakening Kindness in the Great Room of the DePauw Nature Park Reflection Center.

Photos by Eric Branco (monk and Camilee) and Garret Hoover