Dine on the Square 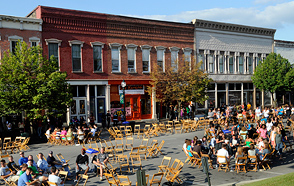 DePauw Student Government (DSG) is asking Greencastle out to dinner.

On Friday, Oct. 11, from 5-7 p.m., students and community members are invited to downtown Greencastle to share a meal during Dine on the Square. Meals will cost $5 and consist of dishes from local restaurants Almost Home, Chief’s, Downtown Café and the Putnam Inn.

North Indiana Street and West Franklin Street on the square will be closed to traffic for the event.

The community dinner coincides with the new United Monon fundraising drive pitting DePauw University and Wabash College against each other in an off-the-field competition to raise the most money for the United Way in the lead-up to the annual Monon Bell football game. Half of the proceeds of each Dine on the Square meal will be donated to the United Way of Putnam County.

In addition to food, diners can expect live music and a prize raffle. Booths from student organizations will also be present at the event.

“Dine on the Square will be an excellent opportunity to foster student-community relationships, support a good cause and enjoy a delicious meal,” DSG Vice President of Community Relations Adam S. May '16 says.

May, the first person to hold his office since its creation by constitutional amendment in April, says the idea for a community dinner came out of campus discussions during the last student government election.

"The building of a more integrated town and school was a main point of Walker [H. Chance '14] and Olivia [C. Flores '14]'s campaign for president and vice president," May says. "The main purpose of the Dine on the Square event is to establish a stronger relationship between the Greencastle community and the University.

"This is the first dinner of its kind, and we certainly hope to make it an annual event," May adds.