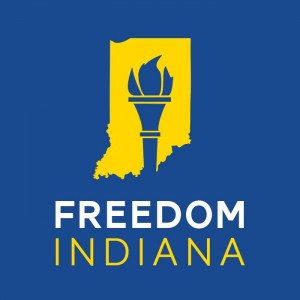 DePauw University and Wabash College announced today that both institutions have joined Freedom Indiana, the bipartisan grassroots coalition opposing Indiana’s House Joint Resolution 6 (HJR6), which would permanently alter the Indiana Constitution to define marriage and would remove existing protections under law for same-sex and unmarried couples and families.

Freedom Indiana is a statewide organization that includes parents, lawmakers, advocates for liberty, faith leaders, educators, academic institutions and some of Indiana's largest employers who believe that the Indiana Constitution should protect all Hoosiers and our state should be viewed as a welcome place for all who choose to call it home. In the 2014 legislative session, Indiana lawmakers can choose either to table or vote down the amendment or send it to voters for a statewide referendum next November. If it does not pass or is not called for action, the Indiana Constitution will be protected, and marriage will still be defined as between one man and one woman.

In making their announcement, the presidents of DePauw University and Wabash College noted that, though their respective colleges are historic rivals, the institutions stand united on this issue.

“The rivalry between Wabash and DePauw is longstanding and hard-fought,” 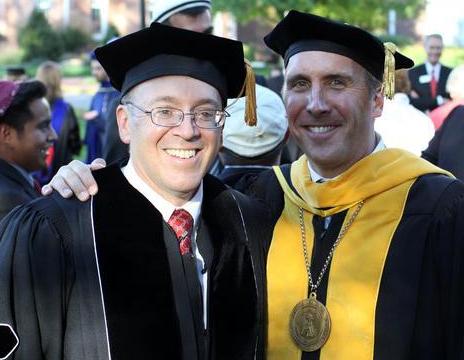 said DePauw University President Brian W. Casey and Wabash College President Gregory D. Hess, alluding to the historic Monon Bell football game between the two institutions. “But today we stand together to join this coalition and lend our voice to support this campaign." (photo: Drs. Hess and Casey at the Wabash president's inauguration; October 11, 2013)

The presidents add, “Our students come from around the country and around the world, and our fundamental goal is to educate them to think critically, exercise responsible leadership, communicate effectively, and tackle complex problems. This depends on attracting talented faculty and staff, a task that is made more difficult by the passage of this amendment. We are also engaged in the enterprise of fostering ideas and innovation, a mission that inherently depends on an environment of openness and inclusion that would be compromised should this amendment be enacted.

The two colleges join some of Indiana’s leading employers, educational institutions, and industry groups as part of the Freedom Indiana coalition. These include Cummins Inc. and Eli Lilly and Company, along with the Indianapolis Chamber of Commerce, Indiana University, and the Human Rights Campaign, among others.

DePauw, founded in 1837, educates 2,300 undergraduates. In addition to its college of liberal arts, DePauw is home to one of the nation’s first schools of music. Dr. Casey, DePauw’s 19th President, holds

Wabash College, a liberal arts college for men, was founded in 1832 and currently educates just over 900 undergraduates. Dr. Hess is the 16th President of Wabash College. He holds degrees from the University of California-Davis and from The Johns Hopkins University. Before taking office earlier this year, Hess served as Dean of the Faculty and Vice President for Academic Affairs at Claremont McKenna College.

Freedom Indiana is a bipartisan statewide organization that champions liberty for all Hoosiers. It was formed in August 2013 to oppose an amendment to the Indiana Constitution that would permanently alter the state’s definition of marriage and potentially affect hundreds of protections related to marriage under current Indiana law. For more information, see www.freedomindiana.org.