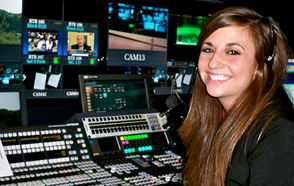 “Storytelling is one of the most important skills for someone who edits video – the ability to accurately convey a message to an audience,” Media Fellow Lydia R. Hayden ’14 explains. Video production became a passion for Hayden as a high school student. She chose DePauw for a liberal arts education to strengthen her media skills and to pursue other interests, such as English writing and music.

Her interest in video production was driven by a passion for film. “I’ve always loved films and the ability they have to move people and the way short films and videos can change the world. That was always my push to pursue video production,” she says. Hayden credits her experiences at D3TV – from sports directing to broadcast engineering to advertising – in helping her enhance her skills in all areas.

In spring of her sophomore year, Hayden asked Media Fellows Program Director David A. Bohmer ’69 about securing an internship in live television, and he suggested C-SPAN. She applied and moved to Washington, D.C. for nine weeks to assist with filming United States House and Senate hearings. She was a field operations intern, which put her on the Hill every day. She met politicians, including Ralph Nader, Michele Bachman and Ron Paul. “It was fascinating and a really exciting summer for me,” she says. 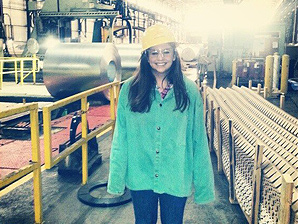 Next, Hayden wanted to strengthen her post-production skills. So, she moved to Chicago during Winter Term to work at Hatfield Post/Production, a company founded by Gabriel F. Hatfield ’97. She said it was a fantastic opportunity, and her experience as a reporter for D3TV better prepared her for the work. (Hayden at left on a production shoot at a steel mill outside of Chicago.)

One of the Media Fellows Program requirements is a semester-long internship. The program sends students to work at a variety of places nationally and abroad, including ABC, The Today Show, The Colbert  Report, The Ellen DeGeneres Show, the New Yorker, the Kennedy Center and more.

Hayden applied to Big Sky Productions in South Africa after hearing the positive experience another Media Fellow had there. She also knew that intern laws are different in South Africa. Hayden explains, “For example, I couldn’t touch a camera at C-SPAN. It was against intern policies, but I knew I’d have a lot more hands-on opportunities with this internship.” 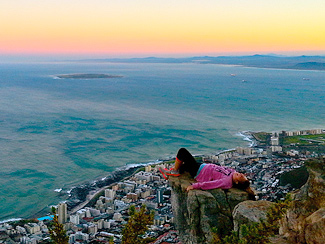 Hayden fell in love with South Africa and hopes to go back one day. (Hayden at right on Lion's Head Mountain in Cape Town) “It was one of the most impactful experiences I’ve had, not only professionally but also personally. I look at my life differently now that I’ve been there. I try to prioritize my life more now – relationships, long conversations, investing in people has never been so vital in my life until this semester.

When asked to identify the project that solidified her career path in video production, she says it was a video that she made for the Be Great Today 5K race campaign during her sophomore year. It’s an event held on campus to support suicide prevention and founded by DePauw students. Hayden felt compelled to make videos to bring life to the situation in a positive way and unite DePauw’s campus.

Hayden created a positive, unifying message for DePauw students and people everywhere about living life to its fullest. She filmed individuals holding signs and then strung them together to make one, long message. It went viral and within weeks had more than 10,000 views from people all around the world.

“I can’t create world change, but maybe I helped create a united front for DePauw. That made me feel so fulfilled, and it confirmed that this is the direction I want to take. I want to use my talents for storytelling – to positively affect peoples’ lives and create change.

After graduation, Hayden will work at INNOVATIVE, a production company in Indianapolis.

For more information about the Media Fellows Program, visit the website.