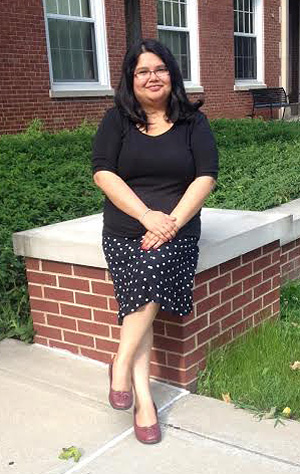 Assistant Professor of Political Science Deepa Prakash has become a student favorite in her short time as a member of DePauw's faculty. Her warm (and funny) personality combines with a deep interest in international security to make her classes as welcoming to students as they are challenging.

Below, Prakash discusses an active summer in world news and how terrorism shaped her career and classroom.

In terms of ISIS, Gaza and Ukraine, it seems like this has been a busy summer. Is that fair to say?

I’ve been thinking about this. This summer made me change my syllabi in significant ways. I normally update them every year, but this summer meant a bigger rethink. You just can’t deny all these big things that are happening in the world.

I do have a hunch as to why this summer seems so chock-full of events. After the Cold War, there was this period where, from the perspective of powerful states, things seemed to really calm down. From the perspective of those who tended to focus on events between powerful states, we had entered this post-Cold War honeymoon period. A famous scholar even called it the End of History, basically predicting that things were just going to be kind of boring. Even when 9/11 happened, Al-Qaeda was a non-state actor, and most big states were unified against them. I think one reason this summer seems anomalous or interesting is that you suddenly see a lot of stories that seem to be ‘old school,’ involving major state actors, such as Russia, or cyclical conflicts, such as Israel-Palestine. And it all highlights the big question of the future of American power and its role in the world.

How did you come to study international relations and, specifically, terrorism?

I think my interests might have been dictated by my roots. My father was an Indian Foreign Service officer, and having that around me from the very start, I was always interested in international relations. He was posted to some countries that India had very complex relations with. I went to high school in Sri Lanka, which is an interesting, complicated neighbor for India. At that point, Sri Lanka’s terrorism problem was sort of at its peak. There was a group called Liberation Tigers of Tamil Eelam, which at that point was arguably the deadliest terrorist group in existence. It was an active part of our reality to hear bombs going off in the city. Your windows would fly open, and you’d know it wasn’t the wind. So, part of me couldn’t help but be interested in these things.

When I finished my master’s degree program in Delhi, I was at this point where I didn’t want to be in school any more. I realized that I had always been in school, and I wanted to actually do something that involved a real-world job. And then 9/11 happened. There was this sense that it was an event that ‘changed everything’ for many countries, not just the United States, and it refueled my interest in understanding this phenomenon. I think I was just always interested in the idea of political violence and all the definitional ambiguity around the word terrorism, and that sustained me through my dissertation.

Terrorism has very specific connotations in the United States. Does our understanding of terrorism change?

Terrorism, to define it minimally, is the use of indiscriminate violence against non-combatants or civilians. That’s the minimum, core definition that almost everyone can agree on. Terrorism has always been around as a phenomenon, but it has evolved through time.

What 9/11 did in the United States was to focus attention on a certain type of terrorist entity. However, if you remember, initially it prompted the War on Terror, not the War on Al-Qaeda. The Bush administration was conscious in its rhetoric that all terrorism, regardless of its origins, was bad. There was clarity in saying that this effort was against all terrorism. Over time, efforts did come to be centered on certain types of groups – particularly Al-Qaeda.  But initially, because of the global focus on terrorism, a lot of states had the incentive to be involved in and try to benefit from the war on terror. You had all these cases of small countries with one troublesome domestic group saying “We also want American aid to fight our terrorism” and countries like Sri Lanka or India, for instance, saying, “See? We’ve been talking about this forever.”

With the dismantling of the original Al-Qaeda, the killing of bin Laden and the emergence of ISIS – or IS, Islamic State, as they are now called – in Iraq, things are changing again. It’s not entirely clear how much of a threat ISIS is to the United States, so it’s an interesting moment to see how the U.S. shapes its policy toward them. Nobody is going to do anything to help ISIS, of course – they’re bad news. But will the U.S. go after ISIS with the same tools that they did Al-Qaeda? [Note: Since conducting this interview, the United States has begun targeted air strikes on Islamic State forces in Iraq.] So again the specific connotations of terrorism in the U.S. context could change.

With so much going on, what are your research interests at the moment?

My dissertation research was about U.S counterterrorism, but my broader interest has always been the politics of naming and shaming. For a long time in international relations, the thought was that the only things that mattered in shaping state behavior were material incentives, such as money or military consequences, but I come from a school that’s also interested in non-material incentives or factors. States, like other entities that are social, have identities. Things such as reputational costs can also impact state behavior. There’s a big debate about this in the field.

My next project is to look at how naming and shaming affect the behavior and orient the policies of leaders, starting with a pilot study on Turkish Prime Minister Erdogan with a colleague. Turkey is not a rogue state, but it comes under a lot of criticism for its human rights record or other behavior, such as its supposed support of Hamas. We’re particularly interested in the band of so-called emerging powers and how criticism from the West shapes their foreign policy. .

Couldn’t this kind of shaming be worn as a badge of honor by certain leaders, depending on the source?

Yes, absolutely.  For instance, shortly after 9/11, China pressed very heavily for certain groups to be designated as terrorist organizations by countries in the West. There was a rumor going around the upper administration of one such group that they were going to be placed by the United States on a secondary list of not-so-important terrorist groups. Apparently, the texts and messages that went around were like, “Yes! We made it!” and “This is going to give us so much cachet!” So, yes, the source of the criticism matters in determining its legitimacy and consequences, and also how it will play to audiences important to the groups.

Since it was such an important moment in your own life and career, is it strange to be teaching more and more students who aren’t old enough to remember 9/11?

I taught a first-year seminar last year called the Post-9/11 World in Fiction, and there was a little bit of this tension in the premise of the class. Most of my students would have been very little at the time of 9/11. Some of them had very fleeting, vague memories of the day, and others just didn’t remember it at all. So, on one hand, this event is rightly becoming part of history, but the legacy of the event – whether the wars that were fought or the new national security apparatus – surrounds us. The day itself is something that students won’t be able to remember, but the way it changed the world and the United States’ relationships with different countries is still very much a product of the event.

DePauw’s student body is also made up of many different nationalities and ethnicities. How does having a diverse classroom affect conversations about international topics?

When it comes to sensitive topics, it can be tricky because you want to be cognizant of somebody’s sensitivities; but at the same time we are in the classroom, and the emphasis is on being analytical. It’s really great to have people from different countries and backgrounds in the classroom. I bring somewhat of a different perspective being from another country myself. There are plenty of different views, but once in a while, somebody will question a taken-for-granted assumption. And it’s great. It gives everybody a moment to reflect.

You’re also a member of the Conflict Studies Steering Committee. Political science and conflict studies clearly have some overlap, so what are the differences?

Political science as a discipline has a few different branches. My area is international relations, which means I am looking at relations between different international actors. It used to be just countries or states, but increasingly you have to consider other non-state actors, such as terror groups and multinational corporations.

One funny anecdote: During the 2008 election, I was a graduate student and excited because it was a really interesting election. I went to a professor of mine and said, “Tomorrow is going to be crazy when we find out who wins.” And he said, completely without irony, “I’m a political scientist; I never get excited about politics.”