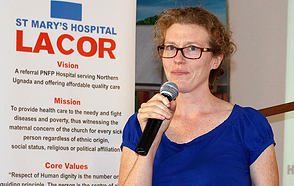 Associate Professor of Chemistry and Biochemistry Sharon M. Crary has worked with Ebola at the CDC's Special Pathogens Branch and as a member of a response team during an outbreak in northern Uganda in 2000. At DePauw, she has continued her work on the virus with students, combining education with real-world research.

Below, Crary talks about the recent spread of the Ebola virus, her experience in Uganda and how a popular thriller changed the trajectory of her career.

I was working with an RNA molecule when I was in graduate school, and I really liked RNA, but I wanted to do something a little bit less focused on the molecular level and a little more biologically relevant. About that time, I read The Hot Zone, and I thought it was amazing. So, I have a totally cheesy, ordinary reason for why I became interested in Ebola. After I read The Hot Zone, I started reading actual science articles about Ebola, and for my postdoctoral research, I applied to work at the CDC in Special Pathogens. That’s how I started working with Ebola virus. It was the kind of thing that would motivate a child, but I think it’s okay to have goofy motivations.

From a science point of view, I liked Ebola virus initially because it has a pretty small genome. It’s a long piece of RNA, but there are fewer than 10 proteins, so you have this first impression that you can actually understand the virus. It sort of gives you this false illusion that there’s hope for understanding it. But viruses are really complicated, so I think it is an illusion for the time being that we’ll understand a virus entirely. 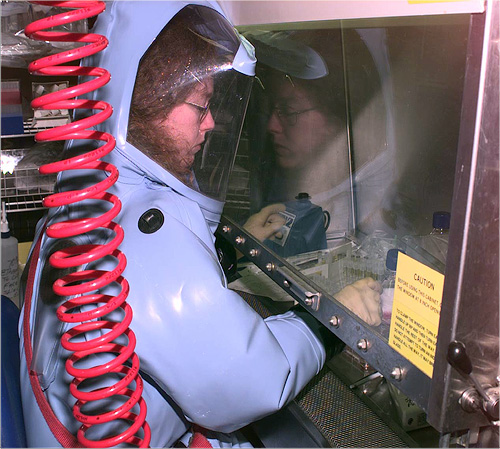 Above: Crary working in a protective suit at the CDC.

You were part of a CDC response team to the Ebola outbreak in Uganda in 2000. Tell us about what you did there.

While I was at the CDC, I wasn’t technically a government employee, so they “offered me the opportunity” to go to this outbreak. A group from my branch had already been there for two months and had been through really bad things. My boss asked me if I would go to replace one of my colleagues, who should have been home with his child for Christmas. My husband and I talked it over, and the next day I was on an airplane out. I was there for a month and a half, and I ran one of the diagnostic labs. There were two types of diagnostics: one looked at proteins or antibodies to the virus, and the other looked at the actual genome of the virus. I was in charge of the latter one.

What was it like going from a controlled government lab to actually seeing the disease impacting people?

It was really different working in the lab in Uganda, but it wasn’t as bad as it could have been. In terms of my lab, it wasn’t a BSL4* facility. [*Biosafety Level  4, the highest rating for a biological research facility.] There were ants crawling in and out of tubes sometimes. If you took your gloves off, you couldn’t get them back on, because when you washed your hands it was so hot that you couldn’t dry them. It was pretty different, but it was safe.

I got there during the second half of the epidemic. There were people in isolation and people who were sick, but nobody died of Ebola while I was there. I didn’t have to see the worst things that people have to see during outbreaks, and I think that actually changed for me the experience there. The Ebola part for me wasn’t emotionally draining, whereas for the first team I think it was.

Instead, I also volunteered at an orphanage every day, and I was able to recognize some of the benefits of the hospital I was staying in. We were at a really high-functioning hospital in northern Uganda, which, especially at the time, was a very poor area that had been under rebel activity for two decades. The hospital there was one of the only good things. It offered healthcare, it offered jobs, and it offered a place for people to sleep at night.

You said none of the patients died during your time in Uganda. Had the care improved that much by the time you got there?

The contact tracing and isolation were working. That is what brought that epidemic to a close so quickly, compared to the current one. Lots of organizations and individuals were involved. There were constant health messages broadcast to the community. People were willing to come to isolation when they were sick, which always strikes me as the most courageous thing a person can do.

At the same time, Ebola has a much lower transmission rate than many other viruses. Because it’s so big, the current outbreak is one of the first times we’re getting good statistics on what’s really going on. Fewer than two people are getting infected right now from any one person who’s been sick, and that includes the first six months of this epidemic when there was basically no control over it, in a place where people are already living in very bad conditions. That’s one of the things that tells us there’s no way it’s an aerosol transmission. We know that because we’ve studied it, and it’s never happened in past outbreaks. If it was transmitted through aerosols, more people would be sick – the rate for flu transmission and measles transmission is something like 10 new people infected for every one sick person. 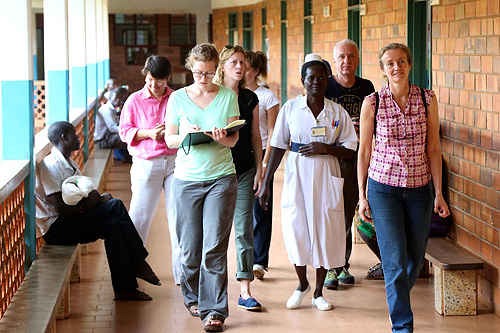 Above: Crary taking notes during a recent return trip to the hospital where she served during the 2000 outbreak.

For the people who survived Ebola infection, do we know what set them apart?

No, I don’t think so. There are certain things, like if your viral load – the number of viral particles in your body – gets to a certain place, then you will definitely die. There are a couple immune indicators that seem to correlate with death versus survival, but it’s really hard to know exactly what’s going on with them. I always heard from the people I worked with that if you got hiccups, you’re more likely to die. In this outbreak, looking at thousands of people, it seems to be true. It’s not a guarantee, but it’s more likely. Everybody gets a fever, everyone gets a headache, but hiccups seem to be a later-stage presentation.

There is a lot of concern about Ebola spreading in the United States. Do you think the alarm is misplaced?

Absolutely. I’ve been surprised how people on both sides of the political spectrum are using this to make their points heard. I hear people saying, “We should be shutting down the border with Mexico because people will be coming in with Ebola,” and on the other side you hear people saying, “If only we had universal healthcare coverage, Ebola wouldn’t be a problem.” And really, I think that’s just the same thing we always hear where people are just using whatever is current in the news to make the same point they want to make. I think Ebola really has very little to do with either of those scenarios.

Tell us a little about how you study Ebola now. How is your kind of research done safely in a college lab?

One of the ways our government minimizes the risk from Ebola virus is to limit the people who can replicate it. It can only be replicated in a BSL4 lab by people who have high-security clearance. In my lab, we work with just one protein from the virus and how it interacts with one small piece of the RNA. The RNA itself has 19,000 bases, or 19,000 “beads” long, and we work with just 100 of them at the end. 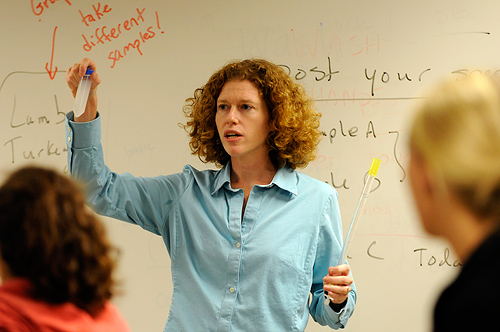 How much can you and your students do with such a limited portion of the virus?

In some ways, anything you know about the Ebola virus helps you. There are so few proteins that everything that’s happening with it is essential. This particular protein that we study interacts directly with the genome, and that interaction is necessary for virus replication. So, in theory, if you could break up that interaction, it would be a way to do an intervention.

One of the things I like to do with my research is to pick something that has a biological application. It can really motivate students because they see how it affects people, but it also fits with a broader biochemistry interest. This is just an RNA protein interaction, and people are really curious about interactions like this happening in our bodies. They happen in every infectious disease and every pathogen. So, anything we can understand about this contributes to our general knowledge of biology and of human systems. I mean, who knows what we’ll find? But it’s certainly a nice to say we’re not just fishing in the dark. This is Ebola virus, and this is a step that’s essential for its lifecycle. If we could find something about this interaction that is unique to Ebola and different from the way it works in humans, that’s what you’re looking for in a drug.

We also have great students here, and it’s fun to work with them. I think research experience is one of the best things you can give students. It allows them to appreciate learning.