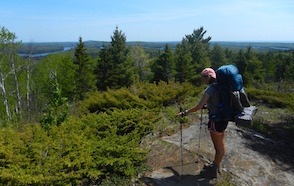 Isle Royale is a remote island cluster in Lake Superior and the destination of a recent May Term trip for nine students led by Steven “Steve” R. Timm, professor of communication and theatre.

The trip – Writing the Wilderness: Backpacking Isle Royale – was based on Timm’s focus of his own creative work and scholarship for the last 15 years, which is going to wilderness areas and writing about those experiences. Isle Royale has played a significant role in his work over the years, including being the basis for two plays he wrote and staged for DePauw Theatre in 2007 and 2014.

Prior to their departure to Isle Royale, students met with Timm throughout the spring semester to learn about backpacking, moose attacks, lightning, first aid and what to expect in general. Committees were assigned for food preparation and logistics. Each student had a research assignment and two texts they were required to read – Napier Shelton's Superior Wilderness and and Timothy Cochrane’s Minong: The Good Place-Ojibwe and Isle Royale – in preparation for their two-week stay on the island.

In addition to their daily hikes, which totaled 120 miles, students had to write for two to three hours each day on a prompt Timm provided, which was a quote about the wilderness by various writers, including Aldo Leopold, John Muir, Cheryl Strayed and Terry Tempest Williams. They were quotes that Timm had come across throughout his work and were significant to him to help contextualized the experience. Students were then asked to write about the experiences they were having in the wilderness.

Timm explains that there is a certain mental place you need to find on this type of trip. “There is a level of discomfort. The backpack is always heavy, and the boots are always wet, but once you accept that, you can move on to explore some of the other things that are going on in your head,” he says. 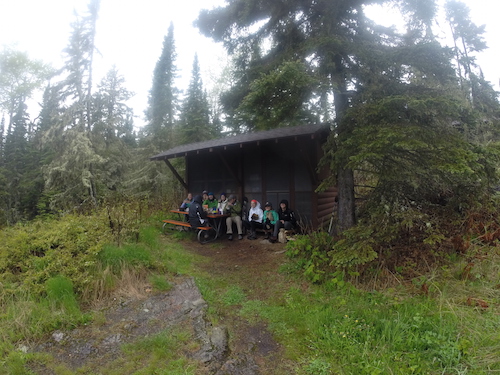 All but one of them saw moose, and some saw newborn calves. “We were up there the week that the calves were born. They are all born within a one-week period, which I think is fascinating,” Timm says.

They also saw fox and wolf tracks from the three remaining wolves on the island. “It’s a very fragile environment, which is why the wolf and moose study that’s been going on since 1947 has been so important,” Timm says. The effects of global warming nearly decimated the moose population because the winters weren’t cold enough to kill the moose ticks and so the moose population plummeted.  Fewer moose then stressed the wolf population because less prey were available.

With a couple of cold winters the last two years, the moose population has recovered. The wolf population, however, has fallen from eight to three in the last year.  Plagued by reproduction issues from a limited gene pool, along with the hazards of taking down a full-grown moose, the wolves of Isle Royale are at a critical point in their survival.

Isle Royale is one of the best barometers of the environment that exist because there are more varieties of lichens on the island than any place on earth, and lichen are great indicators of the health of the environment. They absorb pollutants from the air. Simply by doing an analysis of the lichen, we can determine the condition of the Great North.

Timm says he feels an obligation to take students on these trips for two reasons. “I have been so fortunate to receive support from the University over the years for two sabbaticals and a Fisher Fellowship, and I think there is value in introducing our students to these areas that are going to require their efforts to preserve.

“In our conversations, we talked about what our responsibilities are as users and stewards of the environment,” Timm says. “The students were really excited about that challenge as they continue their educations.” 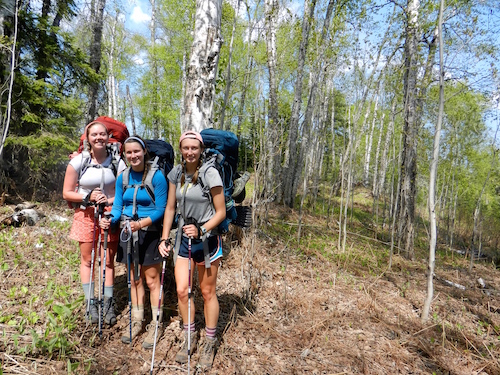 Julia C. Dillon ’17 chose the trip because she loves the outdoors, and she thought it would be a great way to learn more about how to survive in the wilderness.

“I expected the trip to be a challenge I would enjoy, which it was,” she says. “I did not expect how much of an impact it would have on me. I thought we would hike, be a little hungry, see a moose and call it a May Term. I did not realize how much time we would have in complete silence just walking through nature.”

Megan K. Mullin ’17 chose the trip because she wanted to do something out of her comfort zone, and this seemed like the perfect opportunity to try something different.

“I learned about truly living in the present, which is hard to do at home where everyone lives a busy and stressful life,” Mullin says. “Backpacking for 15 days without any communication is a great reminder of the beauty that surrounds us.”

Mullin explains that backpacking allows for hours of thinking and daydreaming. “I wish everyone could experience a trip like this just to realize the importance of taking time for oneself. It is interesting because out there your priorities shift tremendously, so you are only worried about staying warm, hydrated and fed. Instead of worrying about the small things in life, you really notice what is important.

“Words can’t describe everything that I learned, but I can definitely say it will be remembered as one of the coolest experiences I have encountered so far,” Mullin says. 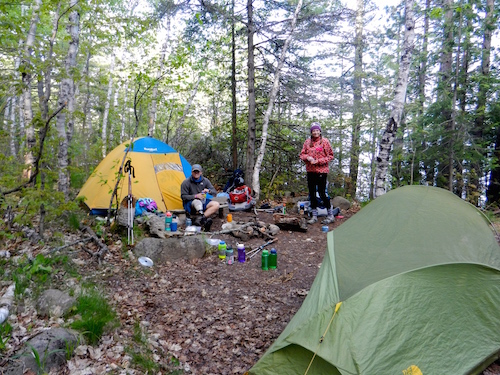 Timm’s next adventure is scheduled during Winter Term 2016, when he and Assistant Dean of Students Jeannette Johnson-Licon will take 10 students to the Florida Everglades, another designated wildlife preserve. The trip will have the same writing component, but instead of staying on dry land, the group will sleep on chickees, which are 12-foot-by-12-foot elevated platforms above the water. Students will paddle a 100-mile canoe trail from the north side of the Everglades to the south side.

For more information about Extended Studies including, Winter Term and May Term, visit the Hubbard Center for Student Engagement website.