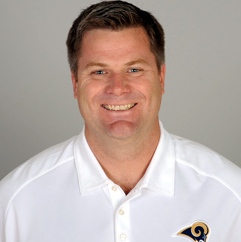 The move was announced today by head coach Jeff Fisher. "Boras, 45, was strongly considered for the offensive coordinator position by Fisher during the offseason," reports the St. Louis Post-Dispatch.

Nevada-Las Vegas, where he was head coach John Robinson's offensive coordinator for three years. The NFL resume of Boras includes serving as tight ends coach for the Chicago Bears (2004-09) and the Jacksonville Jaguars (2010-2011).

Boras is also the subject of this previous story and was interviewed during the national telecast of the 2013 Monon Bell Classic telecast (embedded below).