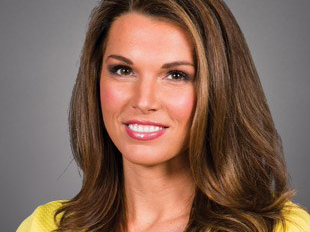 Kristen Nichole Pflum, a 2004 DePauw University who is known professionally as Kristen Nicole, is the new weekend anchor for WFLD/Fox 32's Good Day Chicago.  She'll begin her new duties in the Windy City on March 28.

"Kristen’s strong storytelling abilities and passion for journalism will be a tremendous asset to our morning newscast," says the station's vice president and news director, Tom Doerr.

Nicole most recently anchored at Lexington, Kentucky NBC affiliate WLEX-TV, where she was honored by the Associated Press as "Best News Anchor" and "Best Television News Reporter." A communication

major and sociology minor at DePauw, she began her professional career at WISE-TV  in Fort Wayne, Indiana. In May 2005, she was honored with a third place award for "Best News Reporting" in the Society of Professional Journalists' "Best of Indiana" competition for her work at DePauw's student-run television operation, D3TV.