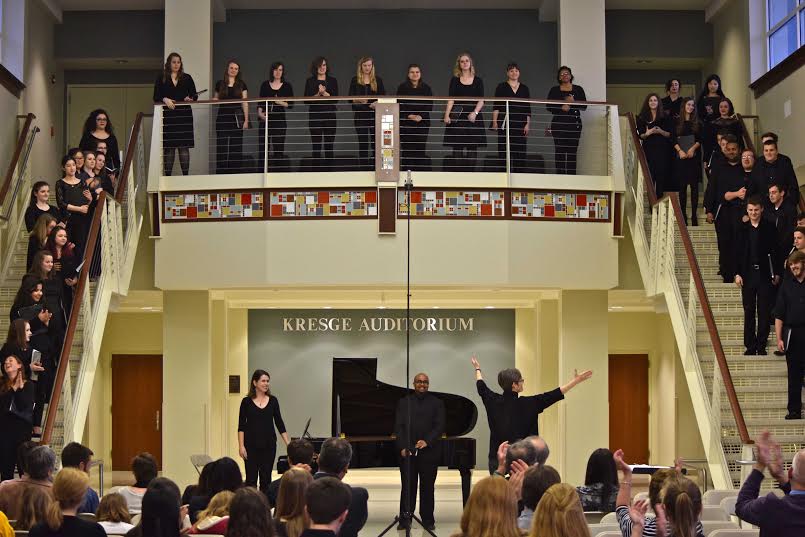 On Sunday, April 17 at 7 p.m., the DePauw University Choirs and DePauw Percussion Ensemble will be joined by Professors Sarah Lee and Jeanette Pope, student Environmental Fellow Madeline Piscetta ’17, and guest hydro-ecologists and water activists to present “WaterMusic: An Immersion Experience.” The cross-disciplinary event will take place in the Great Hall of DePauw University’s Green Center for the Performing Arts.

A 7 p.m. pre–concert open–house, featuring water–themed art exhibits and displays contributed by both student environmental scientists and the event’s guest speakers will flow into an interactive performance of music. At 7:30 p.m., students will sing attendees into Kresge Auditorium for the presentation of three musical works by Tan Dun, Arvo Pärt and faculty member Scott Perkins, along with an introduction to citizen stewardship of coral reefs.

Attendees will enjoy both performances of and participation in music about water from many traditions while also learning from scientists and event organizers about the many ways that local citizens can protect rivers, lakes, and oceans and ensure that they and their neighbors have clean drinking water.

Another singing procession will move the assembly back into the Great Hall for musical performances in surround-sound and for presentations on citizen river-keeping, the Flint water crisis, and philanthropic efforts to provide clean drinking water to orphaned children in Uganda.

Composers and styles featured will include music from the

Renaissance to reggae, Bach cantata to American, Ugandan and Caribbean folk songs, as well as new works by living composers.

A post-performance reception affords the public the chance to talk with the evening’s guest speakers, who include Chad Menke of the U.S. Geological Survey, Indra Frank of the Hoosier Environmental Council, private water activist Dominique Sherter, Sister Stella Sabina of Shifting Ideas through Education for African Women (SITEAW), Kizito D. Kalima of the Peace Center for Forgiveness and Reconciliation, and Charlie Wiles of the Center for Interfaith Cooperation.

General admission to Sunday’s joint presentation is $3; tickets for seniors, youth and all students are free thanks to season sponsors Judson and Joyce Green ('74 & '75). Tickets may be obtained in person at the venue’s box office, beginning one hour prior to the performance, or online at any time at www.brownpapertickets.com/event/2478324.