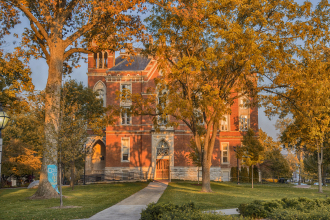 DePauw University's D. Mark McCoy is among 110 college and university presidents who "have issued a joint letter to President-elect Donald Trump urging him to forcefully 'condemn and work to prevent the harassment, hate and acts of violence that are being perpetrated across our nation, sometimes in your name, which is now synonymous with our nation’s highest office,'" as Inside Higher Education reports this morning.

Scott Jaschik adds, "This action is needed, the presidents write, because of the incidents taking place nationwide, including many on college campuses. 'In our schools, on job sites and college campuses, on public streets and in coffee shops, members of our communities, our children, our families, our neighbors, our students and our employees are facing very real threats, and are frightened.'"

The letter concludes, "One of the roles of leaders is to protect and empower the most vulnerable. As president-elect, this responsibility rests heavily on you. Let this be a mark of your leadership."

The complete article and letter can be accessed here.