Angie Andrews Torain ’94 came to DePauw to play basketball, having been a standout player in high school. But after her first year, she decided to focus solely on academics. 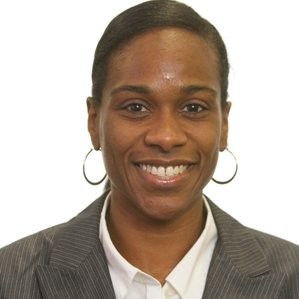 “I think I was a better high school player than college,” she said. “College is definitely more elite, more challenging. I was trying to adjust to a rigorous academic life at DePauw and something had to give.”

The sociology major’s decision in favor of academics paid off; three years after graduating from DePauw, she earned a law degree from the Indiana University Maurer School of Law.

Throughout her subsequent career, academics and athletics have converged.

She previously worked as associate commissioner of the Summit League, a Division I conference of Midwestern schools, and deputy athletic director at the University of the Incarnate Word.

Torain was drawn to sports administration because of its connection to student-athletes.

“I know what it feels like to go somewhere and maybe not feel like you fit in,” she said. “And sports has been the way to get through and experience the things in life that you couldn't experience on your own because of social economics, or whatever the case may be. …

“Everyone needs someone to champion them, because college is hard, but it’s rewarding, too.”

While most of Torain’s Notre Dame job was to ensure the university complies with NCAA and conference rules, she also oversaw diversity and inclusion work, in which she provided programming about biases and safe conversations and urged student-athletes and coaches who wished to make a difference to focus on the impact of their actions.

“From the diversity and inclusion standpoint after everything with George Floyd and Breonna Taylor, our student athletes were at a tipping point, and wanted to be more active in the community,” she said.

Torain described that the process as heartbreaking but also rewarding, as she witnessed the Notre Dame campus focusing on diversity and change.

She foresees positive changes for women in the sports arena, though they have been slow in coming despite the requirements of Title IX. “It’s 2021 and we still can't get that right,” she said. “It’s saddening. You see it across the country.

“Hopefully our children will be smarter and get into those positions where they can actually make the change where we couldn’t,” she said. The next generation – including her three daughters, ages 25, 20 and 14 – “is a lot bolder. They’ve found their voice a lot quicker than I did.”

Her daughters all are volleyball players. The oldest played in Division I; her middle daughter, Division II; and the youngest hopes to play in high school.

Torain said she has told them, “you can play as many sports as you want.” But she also passed along a lesson she learned after her first year at DePauw: “Let's make sure academics are first and then everything else will follow.”