Look at Adalky Capellán’s paintings and you’re looking at her life.

Both in technique and subject matter, the work of the 2013 DePauw graduate reflects Capellán’s experiences and depicts people important to her.

“My artwork deals a lot with layering and identity and understanding people in the community and politics in a very simple way,” she said. “I retexture the stories. My work is storytelling, and layers specifically and textures and my materiality investigate different spaces, different perspectives. …

“I feel like, as my identity is layered, the work that I do is very layered.”

She has, she said, “two different identities,” speaking English most places but Spanish at home in the Bronx with her parents, immigrants from the Dominican Republic. She paints with bright, hyper-pigmented and saturated colors that she saw on summer vacations to her parents’ home country.

Her massive abstracts are reminiscent of the graffiti sprawled on walls and construction scaffolding in the Bronx. Intimate portraits, meanwhile, portray people such as the old man who greeted her and her siblings every morning as they walked to school or the women she met as an affordable housing advocate and a community organizer, “women who stood out to me because of the way they’re respected by their own community and the work, the physical labor, that they put into these communities.

“My artwork deals a lot with layering and identity and understanding people in the community and politics in a very simple way. … I feel like I have two different identities. When I go home, I only speak Spanish to my parents. When I go to other spaces, I’m speaking English and I’m doing other things. I feel like, as my identity is layered, the work that I do is very layered.”

“Right now I’m doing portraiture of the women,” she said, “but I want to challenge myself to figure out different ways that portraiture can really carry out what they are doing and their stories. … People like that really frame a community and really allow for people like my mom and my family and other families that come from different countries to feel safe in this space, regardless of what our racial background is, what our languages are, just being there, being present.” 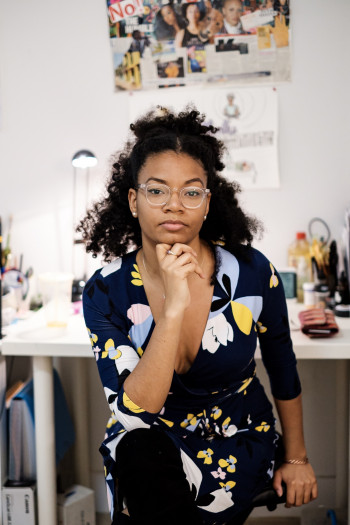 Capellán studied art at the High School of Fashion Industries and planned to go to the Fashion Institute of Technology. But she realized “this was not what I wanted. I did not want to do just art by itself. I think for me I was looking for a well-rounded experience with a lot of things offered. I think that DePauw definitely fit that for me.”

She has worked full-time as an artist since December, having been granted use of a studio by the Chashama organization, which partners with property owners to provide unused rental space to artists for free.