With those life lessons enhanced by master’s degrees in psychology and counseling and by training toward a doctorate that he plans to finish over the next year, Garnes passes along her wisdom through his organization From Afros to Shelltoes, which provides cultural programming advocating practical strategies for social change, personal development and emotional healing. He consults with companies, universities, arts organizations and other clients who wish to empower Black men. 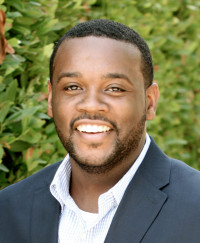 “My programming involves education, history, music and culture,” Garnes said. In Sweet Tea Ethics, one of the organization’s programs, “I’m not giving a canned speech. Someone is interviewing me and I am freestyling on topics.” The goal is to provide practical strategies for personal development.

Another “very successful and highly requested” program is Hip Hop and Healing, “where I talk about how the principles of hip hop have the same elements of Black psychology, and how Black men and Black women and people of color have used hip hop to find healing and to find their authentic selves,” he said.

Garnes also customizes Black history, literature and psychology curricula for colleges and universities, based on the needs of the schools. He plans to continue operating his organization after earning a doctorate from the University of Tennessee; at the moment, he is a doctoral intern at the University of California, Berkeley.

“I talk about how the principles of hip hop have the same elements of Black psychology, and how Black men and Black women and people of color have used hip hop to find healing and to find their authentic selves.”

It’s quite a journey for a man who came to DePauw to take pre-engineering classes but switched to an English writing major with the idea of being a journalist. He wrote for The DePauw student newspaper and got freelance assignments to interview entertainers and write biographies of them.

He also hosted and produced a DePauw television show called “The Underground,” which, among other things, featured commentary on activism, Black psychology and the arts. That was one hint that Garnes someday would emerge as an advocate for Black empowerment; he also co-founded the Student Coalition for Awareness, Revolution and Education, which strove to restructure student government to include representation from and funding for affinity groups such as the Association of African American Students.

But it was not until Garnes had graduated and found work writing for entertainment publications that someone pointed out that “my articles were deeply psychological. Not only was I interviewing people, but I had elements of their psychological development, how they built their self-esteem, how they were able to come back from difficulty.”

That someone was the late Joseph L. White, who was known as the godfather of Black psychology and who happens to be the father of DePauw President Lori S. White. As a DePauw student, Garnes was assigned to escort White around campus when the eminent psychologist visited. With White’s encouragement, Garnes applied to graduate programs in psychology and, though he still dabbles in writing prose and poetry, he headed into a new career.

Garnes, said his mentor Clifton West, “seeks to get up every day and do all that he can do with the gift of another 24 hours to make this world a better place.”

Another mentor, civil rights activist and poet Kevin Powell, put it this way: “I see his life work, especially around mental health, not only advancing Black men and Black boys, but all people, regardless of identity.”