Percy L. Julian, the 1920 DePauw University valedictorian and a renowned chemist who was denied a faculty appointment at his alma mater, was posthumously appointed to DePauw’s chemistry faculty today by the university’s Board of Trustees. 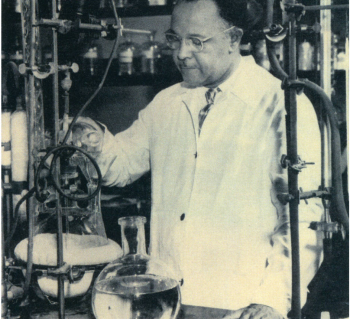 The full resolution is below.

Julian, who was born in 1899 and died in 1975, was the grandson of a slave and an African American who came of age at DePauw and worked much of his professional life during the Jim Crow era. Despite continuing obstacles, his brilliance and tenacity drove him to overcome them time and again during a career that produced numerous scientific discoveries, more than 130 patents and significant financial rewards. His research made it possible to synthetically produce large quantities of cortisone to treat rheumatoid arthritis and other inflammatory conditions; he also developed a fire-suppressing foam that saved many lives during World War II and steroids for application in birth control and miscarriage prevention.

One obstacle was erected by his alma mater. As the third African American in the United States to hold a Ph.D. in chemistry, he was hired by DePauw to be a research fellow. (He had earned a master’s degree at Harvard University in 1923, but was denied a faculty position there, and a doctorate from the University of Vienna in Austria in 1931.) He supervised lab sections at DePauw, and he and a colleague created synthetic physostigmine to treat glaucoma. But the university’s administration denied him a tenure-track position, and he departed for a corporate career that ultimately proved hugely successful.

A resolution approved today by the university’s Board of Trustees said that DePauw’s chemistry and biochemistry faculty members and Dave Berque, the vice president for academic affairs, “unanimously agree that Dr. Julian’s distinguished credentials, as well as his outstanding teaching and scholarly accomplishments, clearly merited a faculty appointment.” His posthumous appointment is for the academic years 1933-34 through 1936-37.

“We can never compensate for the decision made in the 1930s,” President Lori S. White said. “Dr. Julian’s extensive talents as one of the university’s own graduates clearly indicate we missed an opportunity to have a stellar scientist join the faculty.

“This posthumous appointment acknowledges DePauw’s error and recognizes, in an official way, the gem DePauw had in its midst, the tremendous scientist Dr. Julian was and the amazing contributions he made to the world.”

Jeff Hansen ’86, professor of chemistry and biochemistry who was a Julian Scholar while studying at DePauw, said, “not only was Dr. Julian qualified to be on DePauw’s faculty, but he should have been on the faculty of a prestigious research university. His genius was such that he succeeded in spite of his lack of opportunity, but I can’t help but wonder what might have been.”

Despite the denial of a faculty position at his alma mater, Julian continued a positive relationship with DePauw and served on the Board of Trustees. He was awarded an honorary degree in 1947 and was present for the 1972 dedication of DePauw’s Science and Mathematics Center, which was renamed for him in 1980. He was the first recipient of the university’s McNaughton Medal for meritorious public service. A plaque from the American Chemical Society hangs in the Julian Center, designating DePauw a National Historic Chemical Landmark because of Julian’s work.

Four of Julian’s siblings also graduated from DePauw and a fifth was awarded an honorary bachelor’s degree.

WHEREAS, Dr. Percy Lavon Julian graduated Phi Beta Kappa and first in his class from DePauw University in 1920; and

WHEREAS, Dr. Julian earned a Master’s Degree from Harvard University in 1923 and a Ph.D. from the University of Vienna in 1931; and

WHEREAS, Dr. Julian accepted an appointment at DePauw University as a Research Fellow at Minshall Laboratory, where he directed research projects for senior chemistry majors, including projects that resulted in publications; and

WHEREAS, it is the University's desire to address and correct this wrong that research suggests resulted from bias and discrimination against an individual who was by all other measures highly qualified; and

WHEREAS, Dr. Julian’s research after leaving DePauw resulted in more than 130 patents and made it possible to synthetically produce large quantities of cortisone for the treatment of rheumatoid arthritis and other inflammatory conditions; and

WHEREAS, Dr. Julian has been recognized in many forums, including on a 1993 United States Postal Service stamp as a pioneering Black chemist, and as the first African American chemist inducted into the National Academy of Sciences; and

WHEREAS, DePauw’s Chemistry and Biochemistry faculty, President and Vice President for Academic Affairs unanimously agree that Dr. Julian’s distinguished credentials, as well as his outstanding teaching and scholarly accomplishments, clearly merited a faculty appointment; and