As he learned more and more about honey bees, Jay Hosler ’89 “was struck by the fact that these creatures were so, so alien and so unlike us and so really profoundly successful.

“If you’re talking evolutionarily, if you look at the number of species of insects that exist,” he said, “there’s no question they are the King Kong, cat daddies of this planet in terms of multicellular life.” 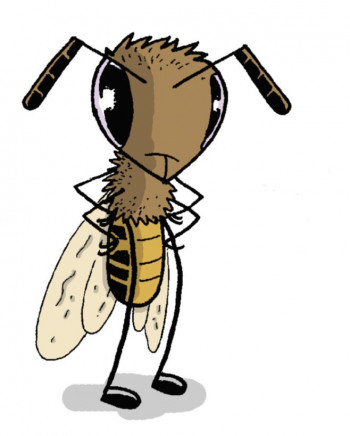 Sometime later, when reading a text about honey bee biology to prepare for his post-doctorate research, Hosler had “that revelatory moment where I realized, oh, my gosh; this is a great story. These are great characters. This is a world that has family, has conflict, but also lives in a bizarre way. I kept thinking someone should make a comic about this. It was literally in the first year of my post-doc when I thought to myself, why, I should try to make a comic about this.”

And so began the union of the disparate pursuits – science and cartooning – of Hosler, the David K. Goodman ’74 professor of biology and chair of the biology department at Juniata College in Pennsylvania. He also is the award-winning author and cartoonist of graphic novels: “Clan Apis,” originally published as five comic books, is about a honeybee named Nyuki. “Optical Allusions” is a college-level comic book about Wrinkles the Wonder Brain. “Last of the Sandwalkers” features an adventurous beetle named Lucy. And “The Sandwalk Adventure” is about follicle mites who live in Charles Darwin’s left eyebrow. He also wrote the text of a fifth graphic novel.

"I’ve always wanted to contribute something unique ... What I discovered as I did it was that I could use this vehicle, use these characters, to inspire interest in organisms that people would normally want to squish."
– Jay Hosler

“Am I a nonconformist? That is a hard question,” he said. “I have a very specific image of a nonconformist. They have an interesting hair color, funky clothes, and they do not care about what other people think. That isn’t me. While my hair is two-toned, that’s just because of the gray hairs, there’s nothing funky about my sweater vests and, while I’m not consumed with other’s opinions, I would be a liar to say they don’t matter. That said, I think my brain is wired differently. I have very specific ideas about how to teach science and what I want to do with my comics. They aren’t always marketable, but I do them anyway. So, am I a nonconformist? I think so, just not in the traditional sense.” 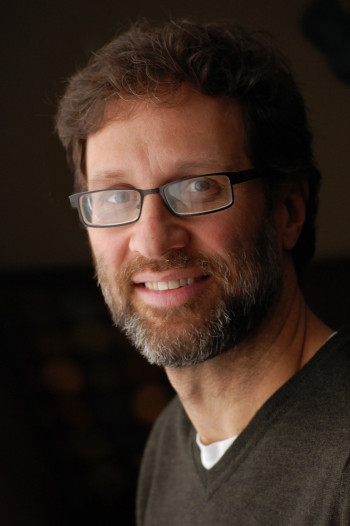 Hosler started doodling in high school and for three years at DePauw drew a comic strip with human characters for every issue of The DePauw, the student newspaper. “My interests existed in parallel” until they converged in that revelatory moment, prompting him to apply for two grants: one for $1,500 to cover the printing costs of the first issue of “Clan Apis,” the other for $100,000 for three years’ salary and research funds. He won both, and “I was way more excited about the 15-hundred-dollar grant. …

“I’ve always wanted to contribute something unique, and my human characters weren’t doing that. But this, I felt, was a unique contribution to comics,” he said. “What I discovered as I did it was that I could use this vehicle, use these characters, to inspire interest in organisms that people would normally want to squish.”

He aims to do that in his Juniata classroom, of course, but also beyond. He gave a TEDx talk called “Science Comics Save the World” and posts comic stories on his website (jayhosler.com) so teachers anywhere may download them for use in the classroom. Edna the ant and Wilbur the fly teach topics such as photosynthesis and cellular respiration.

Over 20 years of teaching, Hosler said, he has come to realize that “I can’t possibly teach all my kids everything they need to know about all there is to know about neurobiology in my neurobiology class. I can’t. I can expose them to some stuff. What I can do is … inspire their sense of wonder (and) stimulate them to learn on their own. And in the end, I think that is the most important thing a faculty member can do for a student.”