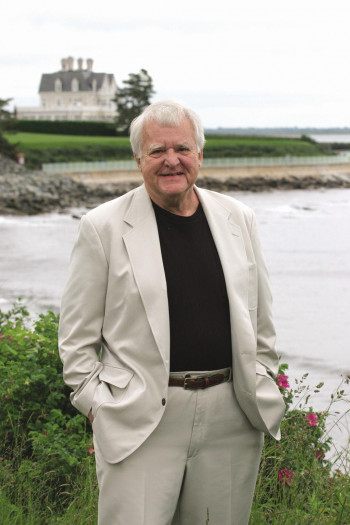 As a teenager, John Jakes ’53, the only child of parents who were avid readers, worked as a page in a branch of the Chicago Public Library, allowing him, he said, “to take out more ‘adult’ books such as the Ellery Queen mysteries.”

Such was the inspiration for a long and prolific career as a novelist best known for writing historical fiction and family sagas. Each of the eight volumes of “The Kent Family Chronicles,” published in the 1970s, was a bestseller. All three books of his Civil War trilogy, published in the 1980s, were No. 1 bestsellers. And he wrote many, many more books.

Jakes, 90 on March 31, said he stopped counting his novels when he reached 81 books, though “a few more, though not many, followed.” He responded via email to questions posed by DePauw Magazine.

He still writes, “though no more ‘doorstop’ novels,” he said. When he was still writing those big novels, he outlined his plots, “but the final product often changes.” On a typical day, he wrote in the morning, then researched or edited during the afternoon. It took him about two years to produce a book.