The Bo(u)lder Question by Pedar Foss

Archaeologists have dated the devastating eruption of Mount Vesuvius to AD 79, but opinions have differed on the exact date on which the people of Pompeii met their fate. That is, until Pedar Foss, classical studies professor and chair at DePauw, figured it out. We asked him:

When exactly did Mount Vesuvius erupt?

In AD 79, at the height of the Roman empire, Mount Vesuvius erupted, obliterating towns, farms and seaside villas in the Bay of Naples. Lost until the 18th century, the well-preserved ruins of Pompeii, Herculaneum and other sites have since captivated generations of archaeologists and visitors. The eruption is one of the few historical events that might be dated precisely, but literary and archaeological sources have seemed to provide divergent dates. Recently, the find of a charcoal inscription at Pompeii with “17 October” suggested an eruption of Oct. 24, challenging the traditional Aug. 24 date recorded in the oldest writings by Pliny the Younger, a Roman senator who witnessed the eruption when he was a boy of 17. Scholarly opinion over the last 20 years has split over which date is correct. 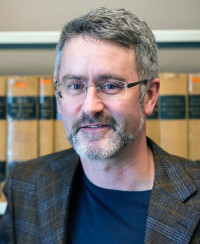 Now, after a nine-year study of all the ancient, medieval and modern evidence, I have clarified what Pliny actually wrote. I had to gather all surviving manuscripts of Pliny’s “Letters.” Previous studies employed about 25, but I examined 79. I recorded all variants among the Latin texts and used both traditional methods of side-by-side comparison, called “collation,” and modern statistical analysis of some 170,000 data points of different readings, with the help of Bryan Hanson, emeritus professor of chemistry and biochemistry at DePauw. This led to a new “family tree” of manuscripts that mapped out how the errors were propagated over the nearly 1,400 years between Pliny’s original and the first printed editions.

A simple scribal mistake, made sometime in the 1420s, of switching a “u” for an “n” for the Roman date resulted in an incorrect date of “1 November.” This error grew in a key branch of texts that was used for the second print edition in 1474. Once that November date came into the novel and fast-growing circulation of printed books, it proliferated – and, like false claims on social media today – spawned further misreadings, misunderstandings and misuses. By the 20th century, seven different possibilities were in circulation (eight, if you count Mark Twain’s “9th of November”). Those many options gave the appearance of doubt concerning what Pliny actually wrote but, upon examination, I was able to explain away each of the mistaken alternatives.

Advances in scientific archaeology continue to offer new techniques for dating the past, but so far, studies of fish, pomegranates, grapes, figs, nuts, pinecones, pollen, clothes, coins and wind patterns have not proven sufficiently precise to confirm any particular date. I provide details of my investigation in my new book: “Pliny and the Eruption of Vesuvius,” which includes new translations and commentaries for Pliny’s letters about the disaster. The data I used are publicly available on the Routledge website, where readers may see the evidence for themselves. I took this step to demonstrate that, even in an age when every claim seems to be contested, careful research process and presentation can produce results with a high degree of certainty. Settling on a date of Aug. 24 should now make it possible to use the Vesuvian eruption as a reliable chronological measuring stick for future investigations of the past.