The Rev. Mary McKinnon Ganz ’71, a former journalist, retired last year from her second career as a Unitarian Universalist minister. 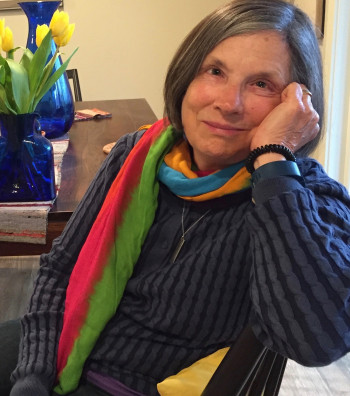 Some weeks after the murder of George Floyd played its sickening reveal on nearly every screen in the U.S. and beyond, there was a demonstration in my senior community. More than a hundred people turned out under hot sun, nearly all of them white, wearing masks, some behind walkers, most carrying signs saying “Black Lives Matter.” It struck me that, before seeing that video, many of these people would have said “What? Don’t ALL lives matter?” A few of them had stopped me coming out of my apartment to ask that very question about the sign that was in my window last year.

So there is an opening, a dawning awareness. May it continue! I worry that it won’t go far enough, that it will stop abruptly when it collides with the perceived self-interest of those of us for whom systems in this country, including the police sworn to protect people and property, have done well.

How much am I and other white people willing to look at? Can we open our hearts to see how capitalist goals of productivity and profit at the expense of human well-being are based on the way field hands were whipped harder when cotton prices were high? Can we open our eyes to how police and carceral systems were instituted to create another form of slavery and control for our Black kin? Will we – we white people – be willing to move beyond a feel-good, antiracist posture toward one that actually dismantles the systems that perpetuate and enforce white supremacy, even when that movement tips against our economic interest? I hope so. It will require a bigger, more conscious opening of minds and hearts. Institutions such as DePauw could take the lead in making it happen. Will we? Will DePauw?