Rachel Gutish ’18 readily admits she was living a double life when she was a student at DePauw.

“Whenever I was in class, I was there,” she said. “I asked questions; I participated; I tried to be the very best student I could be because I knew that it would pay off. I wanted them to want me in their class. I wanted them to be sad I was gone.” 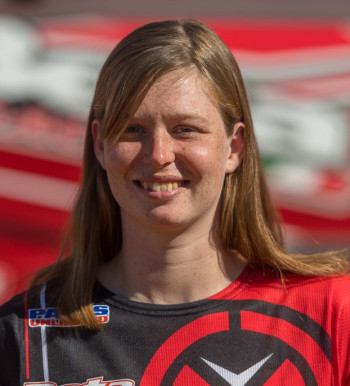 Because she would be gone, usually on the weekends but sometimes during the week too, when road trips to her off-road motorcycle racing competitions were too long to be accomplished without infringing on class time. “It was like I had a double life,” she said. “Nobody really understood both of them.”

She didn’t really expect her DePauw classmates and professors to comprehend her passion for racing, her love of the speed and the wind but especially the competition. Nor did she expect her friends and competitors in the racing world to appreciate her desire to secure a DePauw degree.

“You’ve got to figure out the right path and use momentum. Momentum is always your friend. The faster you hit something, the more likely it is you’re going to make it up.”
– Rachel Gutish

“I would not recommend it for everyone,” she said of her college-era lifestyle. But it was the right choice – maybe the only choice – for Gutish, who started riding motorcycles at 5; started racing at 7; went professional at 15; trains on courses laid out on a field and cut through the woods of her parents’ rural Terre Haute property; pole vaulted for DePauw’s track team for two years;  returned to racing two months after breaking her elbow a year ago; has lost count of her concussions; skipped her high school graduation ceremony to compete in the 2014 X Games, where she won a bronze medal; and has appeared on the podium numerous times in the Grand National Cross Country Series and the National Enduro Series.

Those series sponsor head-to-head “hare scrambles” and time-based, indoor and outdoor “enduro” races on obstacle courses. Her approach to overcoming particularly intimidating obstructions in the latter might double as her approach to life:

“You’ve got to figure out the right path and use momentum,” she said. “Momentum is always your friend. The faster you hit something, the more likely it is you’re going to make it up.”