Three members of Phi Delta Theta, the Indiana Zeta chapter at DePauw University, are being recognized for their scholarship and community involvement through the generosity of fraternity brother Albert L. Lund ’48. 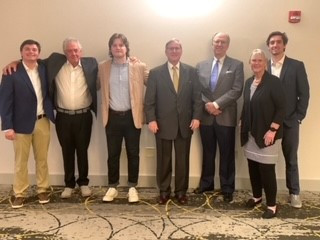 The Albert Lund Awards are the largest Greek-based scholarships on the DePauw campus. Since their inception, 42 Indiana Zeta Phis have received Lund scholarships, totaling $362,000.

Lund established the scholarship in 1999 to reward members of his fraternity for their dedication to academics and their involvement in campus and community activities. His son Larry Lund ’77, also a Phi Delt, returned to campus to announce the scholarship recipients at a scholarship dinner. He was joined by other members of the Lund scholarship committee, Lindsey Lund Peterik ’74, Glenn Davis ’79 and Ed Gower ’77.

“My father was a Rector Scholar at DePauw and without that money (he) could not have attended this University,” Larry Lund said. “DePauw and Phi Delta Theta are two of his greatest loves, and his gifts ensure that both remain strong. My dad got tremendous satisfaction in helping these young men achieve their goals, and he especially enjoyed the letters and e-mails he exchanged with the Lund scholars and learning how their lives developed.