A walkway on the East College lawn will be designated O’Hair Walk in honor of a former student whose trust generated $3 million for DePauw. 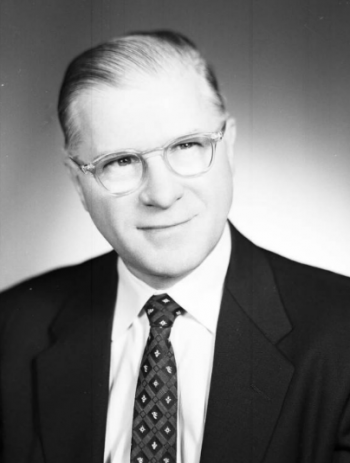 Robert O’Hair established a trust before his death in 1989 that provided three decades of income for several of his family members. When the trust matured in 2019, it provided nearly $3 million in principal as an unrestricted gift to DePauw.

O’Hair attended DePauw Academy for high school students in the early 1900s and began his college work at DePauw University as a member of the Class of 1918. His academic career was interrupted by World War I, and he finished his degree at Indiana University.

An accomplished businessman in telephone communications and print journalism, O’Hair went on to become vice president of Greencastle’s Central National Bank. He was a founding member of Windy Hill Country Club and Cataract Yacht Club and was a world traveler who visited 139 countries, learning about other cultures and their business practices.

The O’Hair name is well known in the Greencastle and DePauw communities. O’Hair’s father, Robert L. O’Hair, attended DePauw from 1870-73. Both the father and O’Hair’s brother, Fred L. O’Hair, Class of 1910, were members of the Board of Trustees for many years. Two sisters, Amelia Pearl O’Hair, Class of 1905, and Mabel O’Hair Stephens, Class of 1907, also were among more than 20 members of the O’Hair family who attended DePauw.

With its unrestricted status, the gift was designated for stormwater infrastructure improvements and beautification to the areas adjacent to the Green Center for the Performing Arts and the Lilly Physical Education and Recreation Center.