Imagine being diagnosed with cancer. Now imagine being a cartoonist and oil painter – a visual artist – and being told that you have a rare ocular cancer. You’ll lose your sight in the affected eye. And the treatment may blind the other one.

“I was terrified,” said Rob Harrell ’91, who got this news 13 years ago. “I was doing my comic strip ‘Big Top’ at the time and it was just horrifying. Not that it wouldn’t be horrifying for anyone. (I thought) What am I going to do for a living?

“At that point I was doing the strip and fine art and I thought, well, the one part of all of this that I could still do is the writing. I don’t know if that spurred me to start writing more or get more invested in that, but over the years since then I’ve sort of shifted my view of myself a little bit from an artist who can kind of write to more like a writer who can also draw.”

As it turned out, a physician in Bloomington, Indiana, intervened shortly before Harrell was to undergo the radical treatment that threatened his sight and used an experimental treatment that saved Harrell’s good eye.

But the experience changed him. “I don’t know that you need to be miserable to write songs about being miserable, but maybe there is something,” he said. “I certainly don’t want to make myself miserable in order to write better books.  … I’ve had a very good life, a very blessed life. The cancer thing obviously was a big speed bump, but I worry … Have I had it too good to be able to write meaningful work? It’s not like I’m trying to write the great American novel. I’m writing middle grade books. But I want them to have impact; I want them to help.”

“I’ve had a very good life, a very blessed life. The cancer thing obviously was a big speed bump, but I worry ... Have I had it too good to be able to write meaningful work? It’s not like I’m trying to write the great American novel. I’m writing middle-grade books. But I want them to have impact; I want them to help.”

The main character of Harrell’s latest book, “Wink,” gets the same diagnosis and endures the same treatment, though the book is not autobiographical. It is Harrell’s sixth book and, with a serious premise, a departure from his previous work. Though it still would be considered a “hybrid” novel – prose with illustrations – it has far fewer illustrations, 80, than his “Life of Zarf” series, the last book of which featured about 350 drawings. And it is vastly different from “Monster on the Hill,” a graphic novel that Harrell wrote and illustrated and that is being made into a movie scheduled for release next July by Paramount Pictures.

Harrell followed his sister, Terry L. Harrell ’86, to DePauw, dreaming of becoming the next Garry Trudeau of “Doonesbury” fame. At his parents’ urging, he declared a political science major so he’d understand the subject matter, but he struggled until he acknowledged that he really wanted to major in art. He switched, and also loaded his schedule with as many creative writing classes as he could get.

He still wanted to be a cartoonist, but several professors urged him to expand. He took classes in figure painting and, while it’s been a few years since he painted, “I know I’ll get back to it,” he said.

“DePauw did an incredibly good job of setting me up. … It was exactly what I wanted – that liberal arts education where I just learned a lot and you learn to learn, if that makes sense. You learn to keep learning. As someone who writes now, I think about how much extra knowledge and information I got while I was at DePauw. … When you’re writing and searching your brain for something, those things just fall out.” 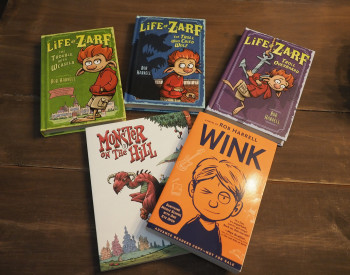 After graduating, Harrell went searching for animation jobs in Los Angeles with a portfolio he now recognizes was lacking. “After a few months of eating Taco Bell every day and living in a little hotel,” he returned to Indiana to start a t-shirt business with his friend, Jon Weed ’92. That lasted a year, until Harrell moved to Sarasota to study illustration at the Ringling College of Art and Design.

Three years later, he was back in Indianapolis, doing freelance illustration for advertising agencies. He soon came up with his idea for the “Big Top” cartoon strip, pitched it and got syndicated. The strip continued for five years, during which Harrell and his wife moved to Austin, Texas, and he got the cancer diagnosis.

“‘Big Top’ did well but it didn’t do great,” he said. “And medical bills started stacking up and all that. I ended up quitting the strip and doing video for all these Texas government agencies.” It was a boring job, and he got to doodling. “I ended up coming up with the characters for the graphic novel, ‘Monster on the Hill,’” he said. “Around that time I also got asked to take over the comic strip Adam@Home,and I still do that to this day.”

Harrell visits schools, where his books often are available in libraries; he also has taken a number of trips, including two overseas, for the USO to visit service men and women in hospitals and rehabilitation centers.

“Going into the arts provides you so many odd experiences,” he said. “You’re not on the fast path to making X amount of dollars, but instead of taking the highway, it’s like taking a trail through the woods. You’ve got to find your way. But you see some really cool things. Sure, you may struggle. I definitely have had times when I’ve struggled. This has not been an easy way to go. But the successes feel so big and the weird experiences -- I never expected to be in Saddam’s palace, hitting golf balls – yeah, it’s weird. But that’s what I love about it and that’s what has been so much fun.”