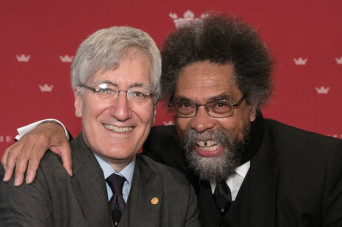 “Our campuses and our words are enriched, our communities become more equitable and we develop open-minded leaders when we explore and are open to discussing and debating a range of ideas and perspectives, freely expressed, while understanding these ideals within the context of the historical experiences of diverse communities.”

Statement on Freedom of Expression

College Campuses and Freedom of Expression

The First Amendment of the Constitution gives individuals the right to free expression in multiple forms, including freedom of speech and artistic expression, among others. According to the United Nations Educational, Scientific and Cultural Organization’s (UNESCO) International Standards of Freedom Expression, everyone has the right to freedom of opinion and expression, which is of special importance in academic communities. On college campuses, an environment that supports freedom of expression and welcomes robust and open debate is essential for the pursuit of knowledge, academic inquiry and preparing students to thoughtfully and civilly engage throughout their lives and careers in a divisive world.

Freedom of expression is broadly well-established in higher education. The Chicago Principles, developed at the University of Chicago in 2015 in response to concerns about speech suppression, are often upheld and endorsed in academia as an exemplary statement in support of free expression.

When Inclusion and Freedom of Expression Come Into Conflict

The topic of free expression can raise complex questions at universities, including DePauw, that also hold dearly the values of equity and inclusion – welcoming people of all identities, perspectives, cultures, ethnicities and backgrounds.

At times, these priorities may appear to be in conflict, such as when offensive speech is deeply hurtful to an individual or group. In a small, close-knit residential community such as DePauw’s, where people from widely varying backgrounds and cultures come together often for the first time to live and learn with others whose viewpoints are different from their own, such conflict is inevitable. Anxiety about not fitting in or being called out in person or on social media may cause some to withhold their views (self-censor), others to react angrily and others to feel deeply hurt.

Freedom of Expression at DePauw

At DePauw, our core values and transcendent priorities encompass freedom of expression and diversity and inclusion.  Our goal is to help our students acquire the skills to civilly debate and disagree – skills that will prepare them to lead – and to provide an environment where students, staff, faculty and guests feel confident in expressing their viewpoints and respectfully disagreeing with one another.

DePauw’s previous Statement on Freedom of Expression was developed in the 1960s. In July 2020, the university named its 21st president, Lori S. White, who was soon after appointed to the national Bipartisan Policy Center Academic Leaders Task Force on Campus Free Expression, called for an update to DePauw’s statement to ensure its relevance to these complex times.

Beginning in fall of 2020 and throughout 2021, while the BPC task force produced its report and President White participated in its national release, the Student Academic Life Committee of the faculty led the work on DePauw’s more robust, new statement, seeking the input and feedback of students, staff, faculty and trustees to ensure the process and statement were and are broadly inclusive.

New Statement and Initiatives in 2022

DePauw's updated Statement was affirmed by the Board of Trustees in May, 2022 after a collaborative-community wide effort throughout the academic year.

In addition to the new statement, a number of other initiatives will launch to enhance support of campus free expression: the implementation of a freedom of expression module as part of new student orientation; the piloting of sections of a first-year seminar under the common theme of “courageous conversations” to help students learn to engage deeply on challenging topics; and ongoing programming for students and employees.

On 2/10/22, President White was joined by Brookings Institution senior fellow Jonathan Rauch for a discussion about how Freedom of Expression is grappled with at institutions like DePauw.  A recording of that conversation is available here.