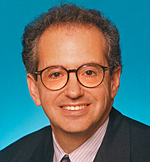 November 16, 2000, Greencastle, Ind. - The George W. Bush-Al Gore campaign of 2000 turned into the closest presidential election ever. For years to come, experts will be trying to evaluate the factors that figured in the election and what the results, or lack of results, mean for the American public. One of the first to share his insights into the results of the election will be Norman J. Ornstein, a resident scholar at the American Enterprise Institute for Public Policy Research and election analyst for CBS News, when he gives The Timothy and Sharon Ubben Lecture tonight at DePauw University.

Ornstein will speak on "The Election of 2000: Who Really Won?" at 7:30 p.m. in East College, Meharry Hall. The event is open and free to the public.

Ornstein also writes regularly for USA Today, and he writes a column called "Congress Inside Out" for the Congressional newspaper Roll Call. He serves as co-chair, with Leslie Moonves, president of CBS Television, of the President's Advisory Committee on the Public Interest Obligations of Digital Television Broadcasters.

He leads a coalition of scholars and others in a major effort to reform the campaign financing system. The League of Women Voters has endorsed the group's campaign finance plan, called "Five Practical Ideas for Campaign Finance Reform" and is leading a major national advertising campaign in support of it.

Ornstein has worked with Al Franken as a commentator and pollster for the Comedy Central network's political coverage, and he is a senior adviser to the Times Mirror Center (now the Pew Research Center for the People and the Press). He appears frequently on television, including Nightline, Today, Face the Nation and The MacNeil/Lehrer NewsHour. He has been referred to as "the nation's hottest pundit" and "an icon of the press."

He served as director of the Renewing Congress Project, a comprehensive examination of Congress that played a significant role in the reforms of the past three Congresses. In addition to writing for major newspapers and magazines, Ornstein is the co-author of three books on issues related to Congress, taxes and health policy.