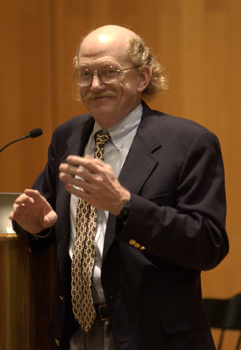 [DOWNLOAD AUDIO: "Exciting Time" 456KB] "It's an incredibly exciting time in science, I think, to have this in front of us," leading human genome researcher Robert H. Waterston, M.D., Ph.D. told an audience at DePauw University this afternoon. "(We) have the prospect of understanding how life really operates."

Dr. Waterston, director of the Genome Sequencing Center and James S. McDonnell Professor and chair of the Washington University Department of Genetics, presented a Timothy and Sharon Ubben Lecture in Thompson Recital Hall, updating the effort to decode the so-called "map of life." Now that the human genome has been sequenced, researchers are now working to determine how many genes there are in a human being, what they do, "and how they contribute to disease. And we will learn how to manipulate them," Waterston predicted.

Bob Waterston sees a day, not far off, when every person will be able to find out if they carry a gene that makes them predisposed to particular diseases. He says within ten to fifteen years, 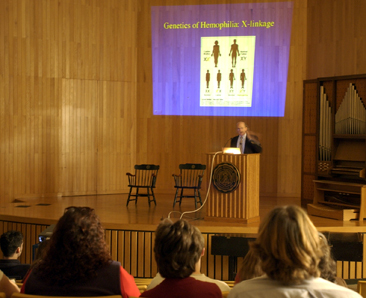 will indeed, for the cost of about $5,000, identify all the variations in your sequence ... you'll end up with it on a card," he prognosticated. "Most of those variations we won't know what they mean, but we will have them. For some of them, (since) we will know what they mean, it will be probably cost effective to do this at birth for every citizen."

The researcher says there will be wide ranging consequences to having such information available to you, and potentially, others who make, decisions about you,

[DOWNLOAD AUDIO: "Controlling Info" 583KB] “It's going to impact insurance decisions, work decisions, spouse selection all of these things are going to be impacted and we're going to have to figure out the rules by which we use this information and how we control it." Dr. Waterston continued, "Clearly, there are forces that would like to control it for less than altruistic means." 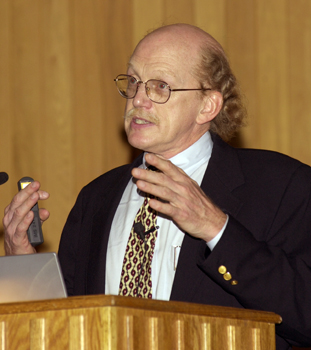 While the work of unraveling humans' genetic code offers tremendous opportunity, it's clear to Waterston that there are ethical dilemmas and potential dangers that accompany the breakthroughs.

How different are we from one another? Waterston says any two independent copies of the genome differ by about one in 1,000,

[DOWNLOAD AUDIO: "99.9%" 424KB] "so looked at one way, we're 99.9% the same," said the researcher who was once invited to The White House to share news of his work with the President. "Bill Clinton really liked this... he used it in Bosnia and said, 'Look guys, you should

stop fighting. You're all the same.' That's a slightly simple version," Waterston chuckled. "Because looked at in the other way, each copy contains three million differences." The professor also notes that there are about 100 copying errors each generation, so some "data" that's been passed down from your parents has actually been changed in the process.

Dr. Waterston says predictions that it would take about 75 million experiments to sequence the full human genome were "about dead on," adding,

[DOWNLOAD AUDIO: "How Long?" 307KB] "in terms of scale, if you wrote the human genome out in just millimeter wide letters, barely readable, and you strung all those letters end to end, the genome would indeed stretch out from here to somewhere around L.A."

During the question and answer session hat followed his hour long speech, Waterston was asked how he viewed those who are skeptical about the theory of evolution. 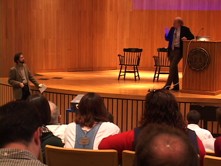 s hard to work the sequence every day and not just accept evolution, because you see the same genes in worms and flies and humans and you see how they've changed. And also you see the variation in humans you see that mutations can occur. You know that all the variation is there on which selection can act," he said.