Examine Your Life, Your World and Your Role in It, Harry Belafonte Asks DePauw Audience 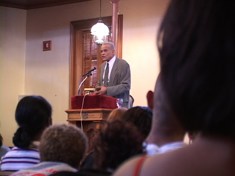 [DOWNLOAD AUDIO: "The Weakest Link" 590KB] "America must begin to understand that the weakest link in our chain is our indifference to the sufferings of other people," the legendary Harry Belafonte said this afternoon as he presented the Timothy and Sharon Ubben Lecture to a packed house in Meharry Hall of historic East College. The singer, actor, and producer, who has actively campaigned for human and civil rights, added, "It is those who have and the extent to which they want to stay that way, at the expense of those who do not have. If these inequities prevail, if they continue to suffocate us, you'll find villainy and terrorism as a constant value in our lives." Known worldwide for his music and movies, as well as his commitment to improve the lives of others, Belafonte urged his audience to ask themselves a question he himself deliberates when thinking about last year's terror attacks.

[DOWNLOAD AUDIO: "Tough Questions" 863KB] "Of the 6 billion people on this planet, what makes so many dislike Americans? Is it just because we're so prideful as a people ... because we have achieved so much? Or, is it because in the process of our development as a nation and as a society, we have robbed so many others of their birthright, their human rights, their economic rights? We speak about the expansion of business and we're looking all the time for new markets and cheap labor and prices that are better than we're able to get from our workers in America. Well, it sounds simple enough as a theory, but how many of us have ever taken time to really understand what happens in the practice of such an affair?"

[DOWNLOAD AUDIO: "The Code" 489KB] "What do you mean by going into societies that struggle to change the conditions under which they live, and because we don't like whom they pick to run their affairs, we walk in and change the way in which business is done. Nations are not supposed to work that way. Sovereign states are supposed to have respect for one another's integrity and independence. That's what we say we struggle for, and yet in many instances, we haven't lived up to that code."

Harry Belafonte says while terrorism in America is new to many people, minorities are very familiar with it, having endured times when they could not vote, ride in the front of buses or eat in the same restaurants as whites, or were victims of hate crimes and other forms of discrimination. 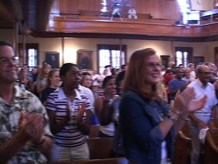 All the things we say we'd like to rid the world of, we have got to stop fueling. We've got to come to the belief that we must be more generous and more benevolent as a country."

The speech by the legendary entertainer, who received several standing ovations, coincided with Coming Together 2002: An Alumni of Color Reunion at DePauw. The first recipient of the Nelson Mandela Courage Award, Belafonte has also been awarded the National Medal for Arts, the Albert Einstein Award, and the Martin Luther King Jr. Peace Prize. Now 75, Harry Belafonte says he's still committed to working toward a better world.

"I stand here today when I should really be off in the Caribbean with my bride, sitting under a banana tree (laughter), singing to bananas (more laughter), 'Day-O'," Belafonte quietly sang to the applause of the audience. "The Banana Boat Song (Day-O)" was a hit song off the 1955 Belafonte album Calypso, the first LP in world history to sell a million copies. Belafonte many other distinctions include being the first black performer to win an Emmy Award.

The seeds for activism were planted, Belafonte told his DePauw audience, when he returned to America after serving in the U.S. Navy during World War II.

"Having defeated the white supremacy philosophy [of Hitler], fascism and oppression," Belafonte was quite confident that he and other black soldiers would be welcomed back to a nation that was ready "to level the playing field." Instead, Belafonte says America became even less tolerant of minorities-- there was a wave of lynchings and other race-related acts of hatred. After seeing the post-war rise in racism, Belafonte says he spent

[DOWNLOAD AUDIO: "Beating Racism" 312KB] "all ... my time planning.. How do we beat this game? How do you get around this monster? How do you keep your soul and your spirit and your dignity intact when so many are heaping acts of indignity and are attacking you so severely?"

It was after the war that Belafonte, who grew up in poverty, was given his first ticket to a theatre production. He became fascinated with the stage and with reading classic books, and enrolled in the New School of Social Research to learn acting. 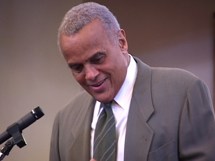 [DOWNLOAD AUDIO: "Classmates" 1008KB] "The first day when I walked into my new classroom, I looked about and I saw classmates. And as I watched each of them -- I was the only person of color in the class -- I wondered how any of them would turn out, because they all looked like such unlikely people to be in the theatre. And who are these people? One was a man by the name of Marlon Brando, my classmate. Next was Walter Matthau ... next was Rod Steiger ... there was Bea Arthur ... there was Tony Curtis. All of us, the first day in the class, learning, eager to go out, knowing that most of us would not make it (laughter). But we did make it. And what made our relationship and our environment so remarkable was the fact that all of us were grounded in social and political theatre, theatre with a purpose."

Harry Belafonte went on to become a star recognized around the globe. 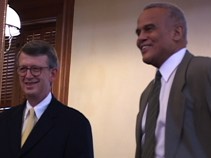 "Why are we given the kind of platform we artists are given, if in fact we do not use that platform in the way commitment to the betterment of human and social development." Belafonte's activism began early, and was took on greater significance after a meeting with Dr. Martin Luther King Jr., which was scheduled to last a half-hour.

[DOWNLOAD AUDIO: "The Dream" 637KB] "At the end of 5 hours, I knew that I would be in his service for the rest of our journey. We became very close, and in that closeness, I had not only a chance to grow, but I was instructed in so many profound ways by his own great thinking -- not only his intellect, but his humanity overwhelmed everybody. And it certainly stimulated me." 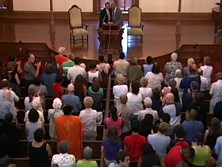 W.E.B. DuBois, Robert F. Kennedy and Eleanor Roosevelt were among the many champions of human and civil rights who worked alongside of Harry Belanfonte in the fight for equality for all people.

[DOWNLOAD AUDIO: "A Prayer" 356KB] "All these friends died in this struggle, died to make a difference. Every night I go to bed and put my head on a pillow -- I say to them -- I hope I've done nothing this day to offend you. And I hope I have continued to move in the spirit of the legacy that you've left for all of us."

Unfortunately, says Belafonte, many African-Americans have don't exercise rights such as 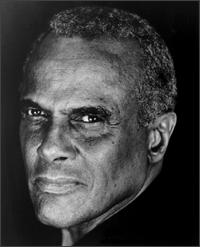 voting that their forebearers fought and died for, and know little about their heritage.

[DOWNLOAD AUDIO: "Failed Ourselves" 543KB] "Go among most black Americans and say to them -- 'Who is the president of Uganda? Who is the president of Mali? Where is Mozambique? What rivers flow through that continent? What is your relationship to Egypt?' And you'll find that the grades ... will be devastatingly low. Somewhere within our own work as a people, as a group, we have failed ourselves," he said.

The man who helped organize the vastly successful 1985 We Are the World recording to raise money for the starving in Africa has been working for the past decade with prisoners, "trying to learn what has trapped young men and women in this vice" and convincing them to follow the example of South Africa's 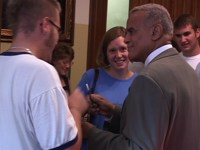 Nelson Mandela to spend their time behind bars reading, thinking and bettering themselves.

To change the world, Belafonte says, you must make a conscious decision to be an agent of change.

[DOWNLOAD AUDIO: "Becoming Involved" 532KB] "The agenda of things to do is abundant. The point is: what do you want to do? To what extent does all of this affect you enough to want to take the high ground and make a difference? To what degree do you find honor in the men and women who make this kind of struggle? Don't just give us the dollar on collection day and think your duties are over. As much as all of these struggles and movements need money, they need your physical [and] emotional support and involvement." (BONUS CLIP: Belafonte on Land

Calling it "a time that is fraught with great confusion," Harry Belafonte, who spent time shaking hands, posing for photographs and signing autographs following his Ubben Lecture, said in closing,

[DOWNLOAD AUDIO: "The Choice" 286KB] "if we do not make a choice to make a difference, we then have made the choice to be crushed by indifference."