June 10, 2003, Greencastle, Ind. - "As an undergraduate at DePauw University, he began drawing a twice-a-week strip for the student newspaper," writes the Chronicle of Higher Education of 1989 DePauw graduate Jay Hosler, an assistant professor of biology at Juniata College, who also writes, draws and publishes comic books. Hosler's "most recent five-part series, The Sandwalk Adventures, is just out in a 160-page book," notes Lawrence Biemiller, adding the plot "is not exactly standard superhero fare: Mara, a wisecracking young follicle mite living in Charles Darwin's left eyebrow, discovers that the great scientist can hear and converse with her. In a series of conversations that take place on his favorite walk, an exasperated Darwin tries to explain evolution as Mara pesters him with question after question."

Later, Biemiller writes, "What The Sandwalk Adventures turns out to be, besides an entertaining and educational read, is a subtle and 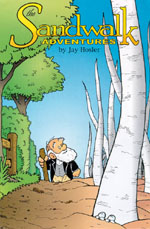 beautifully inked commentary on creationist opposition to the teaching of evolution. And Mr. Hosler, who is 36, did it all in his spare time."

Hosler, a six-time Eisner Award nominee and winner of a Xeric Award, tells the Chronicle, "I grew up in Huntington, Indiana, riding to three different drugstores every week on the day new comic books were delivered to the spin racks." The professor published an earlier book of comics, Clan Apis, in which the heroine is a worker bee. Hosler says his books are designed to educate as well as entertain. "I want to put the information in there, but I don't want the readers to realize that. The goal is always to slip it in and make the science a big part of the story."

The story concludes, "Mr. Hosler says Clan Apis and The Sandwalk Adventures have been popular with reviewers and also profitable, selling thousands of copies. Most likely [the comics] have more fans than the articles he has published in, say, Behavioral Neuroscience.

And there's no doubt he is enjoying himself, even though plotting the stories is hard work and the drawing itself goes slowly. 'I might do a page and a half a day. I might ink a panel between doing some grading,' he says. 'Being dirty and achy at the end of a day sitting at a board is part of the satisfaction.'"

The article is available to subscribers of the Chronicle of Higher Education by clicking here. Read a February 2002 story on Jay Hosler here.

Hosler maintains a Web site, which is accessible by clicking here.