[DOWNLOAD VIDEO: "Signals" 481KB] "When a university like DePauw dreams about and realizes spaces for science such as these it sends signals within and beyond this campus about what is important to your community," said Jeanne Narum, executive director of Project Kaleidoscope, as DePauw University rededicated the renovated and expanded Percy Lavon Julian Science and Mathematics Center this morning.

[DOWNLOAD AUDIO: "Yesterday vs. Tomorrow" 334KB] "These kind of spaces signal that you understand the difference between yesterday and tomorrow, that you understand how different is the time in which 21st century DePauw graduates will live and work from times past."

A three-year renovation and expansion of the Julian Center has nearly doubled the size of the building and provides outstanding new laboratory space, equipment and technology that supports the teaching and learning of science at DePauw. The Julian Center features the three-story Robert W. and Lynn Browne Atrium, where the rededication ceremony took place.

[DOWNLOAD AUDIO: "Preparation for the Future" 813KB] "As someone once said,

when we expected our graduates to work in rows we could teach them in rows; that is no longer the case. These spaces and the processes by which this community arrived at these spaces also signal that you know that the skills needed by 21st century leaders are those that enable them to work in teams, with colleagues from different backgrounds, with different expertise and perspectives on the world. It signals that you know that 21st century leaders will need to know how to puzzle out the complex and complicated 21st century challenges," Narum added. Project Kaleidoscope is a national initiative for the reform, improvement and strengthening of undergraduate mathematics and science education.

Today's event provided an opportunity to thank the donors who made the project possible, the architect and contractors who envisioned and executed the design, as well as a chance to celebrate DePauw's science traditions.

[DOWNLOAD AUDIO: "Dr. Neal Abraham" 254KB] "This is an occasion to recognize the strength of the sciences at DePauw, as well as an opportunity to reflect on those who have made this possible, those who fill these halls and Percy Julian, who has created the standard to which we aspire," stated Neal B. Abraham, vice president for academic affairs and dean of the faculty.

enrolled at DePauw at age 17 and earned his A.B. degree in 1920 with Phi Beta Kappa honors. He subsequently received an M.A. from Harvard University and Ph.D. from the University of Vienna. In 1932, Dr. Julian returned to DePauw where he conducted research that resulted in the synthesis and identification of physostigmine, which allowed for affordable treatment of glaucoma. Julian later served as director of research for the Glidden Company of Chicago, and later founded the Julian Research Institute. His research led to discoveries in the manufacture of drugs, hormones, vitamins, amino acids, paint and paper, yielding over 100 patents, 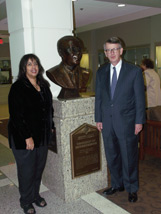 including a synthetic cortisone called Compound S, and the means of producing two synthetic hormones, testosterone and progesterone. During his lifetime, Julian received fifteen honorary degrees and numerous awards and citations, authored and co-authored more than 160 publications, and was a trustee of five universities, including DePauw. Percy Lavon Julian died in Waukegan, Illinois in 1975.

With Dr. Julian's daughter, Faith, among those in attendance at the rededication ceremony (see photo at right; Ms. Julian gave an inspiring speech at the rededication celebration luncheon in the DePauw Student Social Center at the Walden Inn and received a standing ovation), DePauw President Robert G. Bottoms recalled that, when Percy Julian worked for the University he was a research fellow. "Knowing how gifted he was,  one would have thought that DePauw University 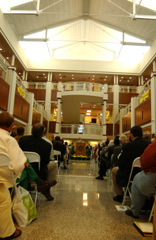 would have offered him a full-time job on the faculty," Dr. Bottoms said. Both the dean of the faculty and DePauw's president at the time (1932) supported such a move, but the Board of Trustees nixed the idea.

[DOWNLOAD AUDIO: "Dr. Robert Bottoms" 1005KB] "We gather to celebrate this building and the Percy Julian legacy today, but we also celebrate how much this institution has changed in the last few decades," Bottoms told the crowd. "How proud Percy Julian would be if somehow he could have lived to see today: a time in the institution's history when African Americans are not denied positions on the faculty but in fact are sought after, a time when we have 30 minorities on our faculty... and we have more minorities on the Board of Trustees than we had in the faculty and student body when Percy Julian was here."