[DOWNLOAD AUDIO: "Inevitability" 481KB] "The question is, we've been hit once, will we be hit again?," former U.S. Secretary of Defense William S. Cohen asked DePauw University students, faculty, alumni and others tonight. "The answer is, it's almost inevitable ... if you look at the probabilities [and] the vulnerabilities and you start having a metric examination of what those probabilities are, you have to say in all probability we'll get hit again because we're so open, because we don't have the discipline, the rigidity of an autocratic state... an authoritarian government. We are -- quote -- a democracy, with all its great strengths, but all of its great weaknesses. And so we're trying to prepare ourselves for this inevitability."

Cohen's speech, "Countering Terrorism: A Voice Of Experience," was presented by The Timothy and Sharon Ubben Lecture Series. A Republican congressman and senator from Maine for 24 years, Cohen became the first

member of the GOP named to a senior Democratic White House post in more than 30 years when President Clinton named him defense secretary in 1997.

A month ago, Secretary Cohen testified before the 9/11 commission. He told his audience in Kresge Auditorium that in the years leading up to the attacks of September 11, 2001,

[DOWNLOAD AUDIO: "Why?" 238KB] "We got lazy. We became somewhat indifferent and lax in terms of our laws, in terms of people coming in and moving about -- following those whose visas had expired, tracking down people we suspected may have unsavory backgrounds, etc. We got a little bit lax, and we got hit hard," he said.

However, getting tougher may be painful and further test freedoms we take for granted, Cohen says. The former senator has a titanium hip, and told the DePauw audience that he is subjected to a comprehensive pat-down and search every time he goes to the airport.

It's a small inconvenience suffered in the name of safety, but he predicts, "It's going to get a lot more intrusive...

[DOWNLOAD AUDIO: "Liberty vs. Security" 292KB] What are the trade-offs that we're willing to make as we seek security? We have the opportunity to [examine that question] now, while there aren't any bombs going off over here. 'Cause the next time there's an attack there'll be more pressure for the government to take more action to become more arbitrary, to not take chances, to draw the profiles more tightly." Cohen added,

[DOWNLOAD AUDIO: "Trade-Off" 213KB] "This trade-off between liberty and security, to me, is going to be central, and I hope the 9/11 commission will address it, because I think it is the most fundamental issue we will face in the future: how do we protect ourselves in a 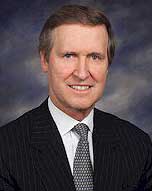 On the issue of the war, Cohen stated,

[DOWNLOAD AUDIO: "Iraq" 393KB] "It's not for me to stand here tonight and say whether it was right or wrong, wise or unwise, to go into Iraq. The problem is, we are there now. Now the question is how do we get out of there in a way that preserves our national security and credibility and reputation for the future. Because if we take actions that are seen as being losers, we will lose more than just that particular campaign, we will lose credibility which will affect our security for decades to come."

Turning Iraq into a success story for the U.S. and it allies will require several things, in Cohen's view.

[DOWNLOAD AUDIO: "UN" 89KB] "We have got to bring the United Nations in as quickly as we can; the U.N. has credibility we don't have with the Iraqi people." Also key is getting the support of the Grand Ayatollah Ali al-Sistani,

the Iraqi Shiite leader, and the Iraqi people as a whole.

[DOWNLOAD AUDIO: "The Big Battle" 587KB] "There is no amount of manpower that we can put into Iraq today that can 'win that war' if we don't have the support of the Iraqi people. Not possible. You could put 300-thousand in, 400-thousand, 500-thousand, it won't matter. Over time it will not matter unless you persuade the Iraqi people, the majority, that their future lies in cooperating with the coalition forces that are there or will be there in the future."

[DOWNLOAD AUDIO: "Winning the War" 142KB] "The war on terror is not

going to be won on the battlefield," Cohen said earlier in the day, at an afternoon news conference at the Eugene S. Pulliam Center for Contemporary Media. The former defense chief believes the war on terror "is going to be won by good police work, covert action, by sharing of intelligence across many countries and integrating that intelligence." Cohen also took part in a student forum and a dinner at the residence of DePauw President Robert G. Bottoms, which was attended by members of DePauw's Board of Trustees.

When asked about the possibility of a military draft, Cohen suggested that not every American is being called on to sacrifice for the war in Iraq and the requirement of national service would help eliminate the disparities that exist.

[DOWNLOAD AUDIO: "A Socially Desirable Goal" 271KB] "As a socially desirable goal, shouldn't we all feel that we're in this together in the sense that the threats to our

existence are across the board. No one is safe in this country... There are no [military] front lines anymore, we're all on the front lines. Everybody here is vulnerable now; everybody in the world is vulnerable."

A graduate of Bowdoin College, Secretary Cohen said he feels right at home on the small, but larger than Bowdoin, campus of DePauw.

[DOWNLOAD VIDEO: "Cohen on DePauw" 148KB] "It's great to be here. DePauw has a terrific reputation."

[DOWNLOAD VIDEO: "The Missouri Mule" 760KB] "I had looked over the speakers that you've had in the past," Cohen joked, "and I felt something like the Missouri mule that was entered in the Kentucky Derby. No one expected him to win, but they all knew he'd benefit from the association," he said to laughter from the crowd.