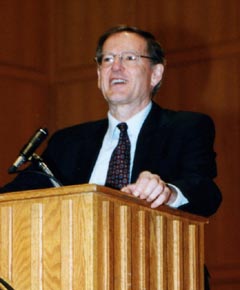 April 16, 1999, Greencastle, Ind. - What is abundant in today's world and will continue to multiply is the capacity to communicate information, and what is scarce and will continue to become more valuable is time, according to George Gilder.  The world-renowned economic adviser, president of Gilder Technology Group Inc. and senior fellow at the Discovery Institute, was on the DePauw University campus this morning to present a Timothy and Sharon Ubben Lecture, "Into the Telecosm: The Effects of Technology in the Next Century."

Going forward, civilization faces "two key limits," according to Gilder: the speed of light -- a technological limit, and the span of life -- a biological limit.  If you apply present abundance to present scarcity, Gilder says, you create something that looks like a digital cellular phone but is, in essence, a palm-sized communicator that is capable of processing immense amounts of information.

"As portable as your watch and as personal as your wallet," he says of the device he envisions.  "It will collect your news, read it to you if you like, do your banking.  It may not do Windows, but it will do doors, opening the door to your future.

"This is an age of material abundance," Gilder told his DePauw audience.  "Adjusted for inflation, substances are cheaper than ever." He also predicts:

As an economic adviser, Gilder pioneered the formulation of supply-side economics when he served as chairman of the Lehrman Institute's Economic Roundtable, program director for the Manhattan Institute and a frequent contributor to A.B. Laffer economic reports. Author of the acclaimed book Wealth and Poverty, Gilder consulted regularly with key figures in the Reagan and Bush administrations and with leaders of America's high technology businesses. He was President Reagan's most frequently quoted living author, and in 1986 Gilder received a White House Award for Entrepreneurial Excellence.

A Harvard University graduate, Gilder studied under Henry Kissinger and taught as a fellow at the Kennedy Institute of Politics. He is the author of 10 books, including Life After Television. He is a contributing editor for Forbes and a frequent contributor to a wide range of publications. 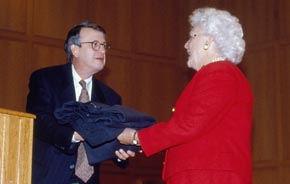 Gilder has been chairman of a small business himself and serves on the boards of directors of Wave Systems, which makes encryption and metering gear, and Berkshire Corporation, which manufactures semiconductor clean room disposables.

Endowed by Timothy and Sharon Ubben, both 1958 graduates of DePauw, the Ubben Lecture Series is designed to bring the world's top leaders, thinkers and creative minds to the Greencastle campus (at right: 1996 guest Barbara Bush with DePauw President Robert G. Bottoms).