December 1, 1995, Greencastle, Ind. - "Why am I here today?," asked former astronaut and retired business executive James A. Lovell Jr. during a Timothy and Sharon Ubben Lecture at DePauw University today. "Because of teamwork both with the crew and the people on the ground," added Lovell, who has received a good deal of attention since Tom Hanks portrayed him in the hit movie Apollo 13. He called the Apollo 13 mission "a great study in crisis management."

Prior to the convocation, three DePauw alumni who became leaders in the field of journalism were inducted into the Media Wall of Fame at 10 a.m. in the Center for Contemporary Media. They are:

Lovell completed naval flight training immediately after graduating from the Naval Academy in 1952, and he logged more than 6,500 hours of flying time. NASA selected him as an astronaut in 1962, and he held the record for time in space with a total of 715 hours, 5 minutes until surpassed by the Skylab flights.

On December 4, 1965, Lovell and Frank Borman were launched into space on the history-making Gemini 7 mission which lasted 330 hours and 35 minutes and included the first rendezvous of two manned maneuverable spacecraft. The Gemini 12 mission, commanded by Lovell, paved the way for the future Apollo flights and brought the Gemini program to a successful close. Lovell served as command module pilot and navigator on the epic six-day journey of Apollo 8, man's maiden voyage to the moon December 21-27, 1968. Lovell and fellow crewmen Borman and William Anders, became the first humans to leave the earth's gravitational influence. He was back-up commander to Neil Armstrong for the Apollo 11 lunar-landing mission.

Lovell completed his fourth mission as spacecraft commander of Apollo 13 from April 11-17, 1970, and became the first man to 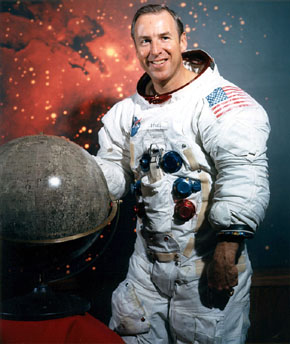 journey twice to the moon. Apollo 13 was programmed for 10 days, but the original flight plan was modified enroute to the moon due to a failure of the spacecraft's service module cryogenic oxygen system. Lovell and crewmen John Swigert and Fred Haise, working closely with Houston ground controllers, converted their lunar module, "Aquarius," into an effective lifeboat. Their emergency activation and operation of the lunar module system conserved both electrical power and water in sufficient supply to assure their survival while in space and for their return to earth.

At the time of his retirement on January 1, 1991, Lovell was executive vice president and a member of the board of directors of Centel Corporation. Centel is one of the nation's largest telecommunications companies involved in local exchange telephone and cellular operations.

Lovell continues to work to make all citizens aware of the importance of being physically fit.

President Lyndon Johnson appointed him as a Consultant for Physical Fitness and Sports in 1967. When the Physical Fitness Council was revised under President Richard Nixon in 1978, Lovell was assigned the additional duty of chairman of the council.

Lovell is the recipient of numerous honors and medals, including the Congressional Space Medal of Honor in 1995 and the Presidential Medal for Freedom in 1970.