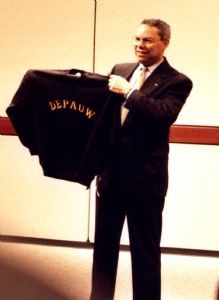 November 2, 1994, Greencastle, Ind. - Gen. Colin L. Powell, former chairman of the Joint Chiefs of Staff, says he is "still a general at heart," but one who is "developing a political philosophy." Gen. Powell, who served as chairman of the Joint Chiefs of Staff for four years under both Presidents Bush and Clinton, spoke at 7 p.m. this evening in DePauw University's Lilly Physical Education and Recreation Center. His appearance is part of the Timothy and Sharon Ubben Lecture Series. (photo at left: Dave Repp)

Powell's comments came after he was asked if he is considering a run for the White House in 1996. He added, "I've given you a terrific political answer.  What that means is, watch this space.  I'll be back."  The general added, "Right now, there is no particular 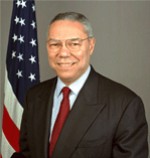 Gen. Powell served as chairman of the Joint Chiefs of Staff during Operation Desert Storm, when a coalition led by U.S. forces drove Iraqi invaders from Kuwait in 1992.

Less than a month ago, he was sent by President Clinton, along with former President Jimmy Carter and Sen. Sam Nunn (D-Georgia), to negotiate a peaceful landing of American troops in Haiti. The three reached an agreement with dictator Raoul Cedras, the Haitian military leader and strongman, just hours before the US invasion force was to have landed. In fact, Newsweek magazine credits Powell with confronting Cedras, even as American planes were in the air, and obtaining an agreement that U.S. troops could land without resistance. 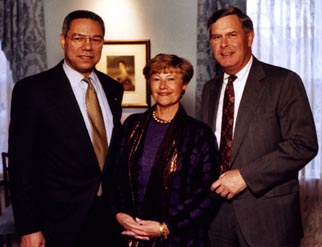 For Powell, the Haitian mission was the latest in a series of accomplishments that has many news and political analysts mentioning him as prime presidential material. In fact, dreaming up a Powell-as-presidential-candidate scenario is one of the favorite games for those who observe American political life. He calls himself an independent, but both parties hope that someday he will run as their standard bearer. In fact, many polls show that if he were to run for President in 1996, he would win. Newsweek's latest poll shows that he would beat President Clinton easily if they ran against each other now. Powell, who is busy working on his memoirs and traveling the country on the lecture circuit, has kept his political plans -- if any -- quiet. (at left: Gen. Powell with Sharon and Tim Ubben; photo by Dave Repp)

Throughout his life, until his retirement in August of last year, Powell has been a 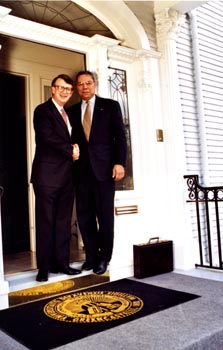 military man. He was born in New York City on April 5, 1937, and earned a bachelor's degree in geology from the City College of New York in 1958. He participated in ROTC there and entered the army as a second lieutenant at graduation. (at right: DePauw President Robert G. Bottoms greets Gen. Powell; photo byDave Repp)

He served two tours of duty in Vietnam, one from 1962-63 and the other from 1968-69. He also was a battalion commander in Korea from 1973 to 1974. Later, he commanded the 2nd Brigade, 101 st Airborne Division and the 5th Corps of the U.S. Army in Europe. Along the way, he earned an M.B.A. degree from George Washington University. He served as commander-in-chief, Forces Command, headquartered at Fort McPherson, Ga., before he was named chairman of the Joint Chiefs of Staff in October 1989.

Gen. Powell is the recipient of numerous military awards, including the Distinguished Service Medal, the Legion

of Merit and the Bronze Star. In addition, he has been honored by the governments of Argentina, Brazil, Canada, France, Germany, Greece, Japan, Korea, Kuwait, Saudi Arabia, Senegal, the United Kingdom and Venezuela.

Civilian awards he has received include the Presidential Medal of Freedom and the Congressional Gold Medal. Queen Elizabeth II bestowed an honorary knighthood on the general in December, 1993.