November 18, 1993, Greencastle, Ind. - "Isolation and protectionism are the twin evils of our time," former Canadian Prime Minister Brian Mulroney said today at DePauw University. Mulroney delivered the Timothy and Sharon Ubben Lecture, "Canada, America and the Future," this morning in Meharry Hall of historic East College.  "If we are to be leaders of the world, we must be involved in the world," he asserted.

During his visit to DePauw, Mulroney also conducted a question-and-answer session in the Center for Contemporary Media's Watson Forum ninety minutes before his 11 a.m. Ubben Lecture, which later aired nationally on C-SPAN:

The speech closely follows Canada's October 25 election in which Kim Campbell, Mulroney's successor and the nation's first female prime minister, lost both the prime ministry and her seat in the House of Commons. The Progressive Conservative Party, in fact, lost in that election more than 150 seats in the House of Commons, retaining just two seats, 10 fewer than necessary to reach official party status under the Canadian system. The Liberal Party won 178 seats, giving it a majority in the 295-seat House of Commons and placing its leader, Jean Chretien, in line to be Canada's 20th prime minister.

Mulroney's visit to DePauw also is timely because of his involvement with the North American Free Trade Agreement, which his administration negotiated for Canada and which Parliament approved last summer.

Canada and the United States are the world's largest trading partners; last year, they exchanged more than $177.5 billion in merchandise. Chretien has criticized the agreement and has said he would like to amend it, although it is not clear whether he would seek to change it after it goes into force or reopen it in Parliament.

As its recent election shows, Canada shares more than common borders, similar cultures and defense agreements with the United States. It also shares many 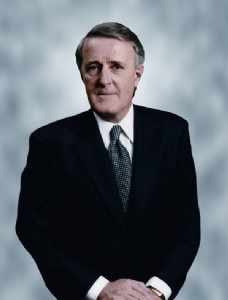 social and political issues. There is in Canada a growing anti-government mood -- including a Ross Perot-like Reform Party that gained 51 House of Commons seats. There is a concern about job creation amid the nation's 11 percent unemployment rate that means nearly 1.6 million Canadians are out of work. There is strong sentiment to eliminate Canada's $350 billion (U.S.) national debt, which is higher per capita than the U.S. debt. Additionally, there is a recurrent effort to reconstitute Quebec as an independent nation.

Mulroney, who first attained Canadian national office in 1983 when he was elected Leader of the Progressive Conservative Party, served as Canada's prime minister from 1984 until June 25 of this year. Mulroney was elected to the House of Commons in 1983 representing the riding of Central Nova, Nova Scotia, and became Leader of the Opposition in the House of Commons that same year. The 54-year-old Mulroney led his party to the largest parliamentary victory in Canadian history in 1984, and was sworn in as the nation's 18th prime minister on September 17 of that year. His government was re-elected in a second mandate in 1988, the last Canadian federal election before the one held on October 25.