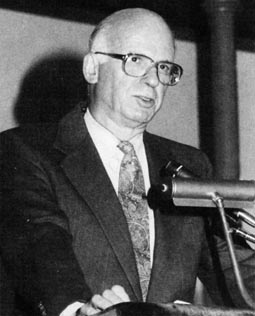 November 12, 1993, Greencastle, Ind. - "This is, in the end, our government, and to a greater extent than many of us want to admit, it is a reflection of us," Washington Post political columnist David S. Broder told an audience at DePauw University this morning. "What it reflects, particularly at this time in our history, is our own ambivalence."

In a Timothy and Sharon Ubben Lecture, "The Impossible Task of Governing," Broder stated, "I genuinely believe after a lot of years of covering this  -- politics and government -- that for all its shortcomings, for all the weaknesses in the institutions that I've tried to describe to you, the responsiveness of the American political and governmental system is still such that when we as voters, as citizens, send a clear and unmistakable message to Washington that this is what we want done, somehow, despite all of these infirmities, the systems does tend to respond and react to that kind of signal.  But we're sending very ambivalent signals to Washington today."

The task of governing is something Broder knows well. He has covered every national presidential campaign and convention since 1960 and travels as much as 100,000 miles a year to talk with voters and to follow candidates. His columns now appear in more than 300 newspapers. He also is author of five books about politics and political journalism. His latest book is The Man Who Would Be President: Dan Quayle.

In addition to his writing, Broder regularly appears as a political analyst on CNN's Inside Politics program and as an interviewer on NBC's Meet the Press.

Here are some of Broder's recent topics:

During today's Ubben Lecture, Broder noted, "Vernon Jordan ['57] and Dan Quayle ['69] told me that this is the preeminent institution of higher learning in Indiana. And I am prepared to believe that is the case."

Broder's first newspaper job was in small-town Midwest America -- Bloomington, Illinois. From there, Broder went to Washington, first to Congressional Quarterly, then to the Washington Star, next to the New York Times. He's been with the Post since 1966.

In addition to a Pulitzer, Broder's work has earned him other prizes among his colleagues. He was named Best Newspaper Political Reporter in 1985 by Washington Journalism Review. Earlier he was labeled by Washingtonian magazine as the Capitol's most highly regarded columnist for his "overall integrity, factual accuracy and insight." And a survey of the Washington press corps by American University said of him, "He heads an elite clan whose articles are carefully watched by the public, politicians and, most important, other reporters."