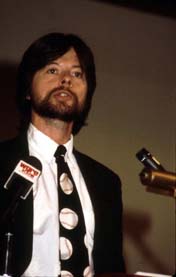 April 8, 1994, Greencastle, Ind. - "I'm now convinced that our future lies behind us, in our past -- personal and collective," Baseball is the one constant in American history," Ken Burns, creator of the Emmy Award-winning public television series The Civil War and the soon-to-be-released series Baseball, said at DePauw University today. The filmmaker, who has been on the DePauw University campus the past three days, today discussed "Kinship of the Soul" in Meharry Hall of historic East College. Burns' visit is sponsored by the Timothy and Sharon Ubben Lecture Series.

Of his new project, the documentarian says, "Baseball is the one constant in American history. Baseball is a mirror of race assimilation, the formation of unions, the exclusion of women, but most importantly it connects us 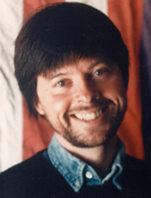 with our parents," he says.

Noting that baseball was the first organization to integrate African-Americans into a white-dominated profession, he stated, "If baseball is there, the public is there." Burns added, "I like to dig under the facts and find out what emotional juice keeps our country together."

In addition to his convocation address, Burns informally discussed his work on Wednesday and Thursday in two separate sessions held at DePauw's Center for Contemporary Media, Watson Forum. A review of Burns' films, including a preview of Baseball, was the focus of Wednesday evening's forum. On Thursday evening, Burns' landmark film The Civil War was the topic of a panel discussion.

Burns has been making documentary films for more than 15 years, beginning with the Academy Award-nominated Brooklyn Bridge. He has since made several additional award-winning films, including The Shakers: 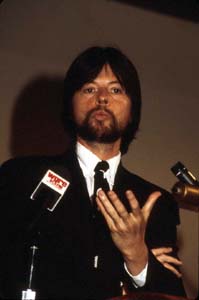 Hands to Work, Hearts to God; The Statue of Liberty (nominated for an Oscar); Huey Long, the story of the turbulent governor and senator from Louisiana; The Congress: The History and Promise of Representative Government; Thomas Hart Benton, a portrait of the regional artist; and most recently, Empire of the Air: The Men Who Made Radio, a history of radio's early pioneers.

Scheduled for release in the fall on PBS is Burns' current project, Baseball, a comprehensive history of our national pastime. Utilizing rare archival game footage, photographs, interviews and early radio broadcasts, the film will span nearly 200 years of baseball history.

The Civil War, which premiered in September 1990, has been honored with more than 40 major film and television awards, including two Emmy Awards, a People's Choice Award and two Grammy Awards. It was the highest rated series in the history of American Public Television, attracting an audience of more than 40 million viewers. The New York Times called it a masterpiece and said Burns "takes his place as the most accomplished documentary film maker of his generation."

Burns' latest book, The Civil War: An Illustrated History, was No. 1 on the New York Times Bestseller List. He also wrote The Shakers:

Hands to Work, Hearts to God, and a chapter on the Statue of Liberty in Centennial.

Ken Burns was educated at Hampshire College and is a founding partner of Florentine Films. He holds honorary doctorates from several universities, including the University of New Hampshire and Amherst College. A native of Brooklyn, New York, Burns, 40, now lives and works in Walpole, New Hampshire, with his wife and two young daughters.