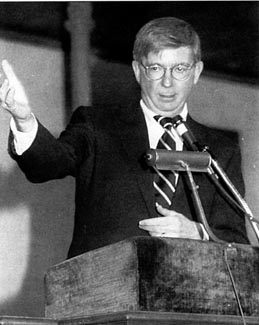 March 4, 1994, Greencastle, Ind. - "The American people today look upon politicians the way Bear Bryant looked upon his football players," Pulitzer Prize-winning columnist George Will told an audience at DePauw University today. "On the first day of practice, he told them 'Be good or be gone,'" Will recalled.  "Our problems are deeply rooted in the culture and cannot be changed by senators and congressmen.  That's good."

Will, who is also an influential television commentator and confidante of the Reagans, spoke this morning in Meharry Hall of Historic East College on "Public Affairs, Public Policy and American Society." His visit was made possible by  the Timothy and Sharon Ubben Lecture Series.

In addition to his twice-weekly column that is syndicated in nearly 500 newspapers through the Washington Post, Will writes the back-page essay in Newsweek twice a month. His newspaper commentaries, in their 20th year, won the Pulitzer in 1977.

Will, a native of Champaign, Illinois, also appears each Sunday morning as a questioner and commentator on ABC-TV's This Week with David Brinkley. He is a founding panelist on that program. He has written eight books, the latest of which is a volume on political theory, Restoration: Congress, Term Limits and the Recovery of Deliberative Democracy. He also has written Statecraft as 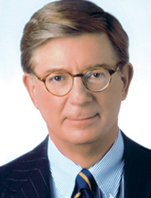 Soulcraft, The New Season: A Spectator's Guide to the 1988 Election and Men at Work: The Craft of Baseball. His other four books are collections of his Newsweek and Washington Post columns.

Will holds bachelor's degrees from Trinity College and Oxford University's Magdalene College and master's and doctorate in politics from Princeton University. He also taught politics at Michigan State University and the University of Toronto.

Before turning to his newspaper column writing, Will worked on the staff of Colorado Rep. Gordon Allot for two years. Later, he was Washington editor of the National Review magazine for three years.