October 28, 1997, Greencastle, Ind. - "I'm a great champion of the idea that there ought to be greater diversity in newsrooms," Gwen Ifill, NBC News national correspondent, said today at DePauw University.  "We are an industry which purports to tell the world kind of, in a veiled way, how it ought to live ... What we have is a responsibility in a constitutionally protected profession to make sure we're telling the story as clearly and as cleanly as possible.  So one of the things you have to bring to that is people who come from different backgrounds."  That, she says, "helps to present a variety of different viewpoints, and you end up with a product more representative of the people you're writing for."

Ifill discussed "The Race Wars: Who's to Blame?" as a guest of the Timothy and Sharon Ubben Lecture Series. Today's 4 p.m. program in the Center for Contemporary Media, Watson Forum, was part of a series of "Conversations on Race" this year at DePauw. Ifill participated in a discussion with Ken Bode, John D. Hughes University 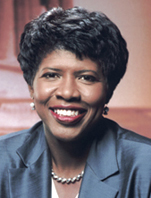 Ifill joined NBC News as a national correspondent, based in Washington, D.C., in 1994. Her beat includes covering political issues and national trends for Nightly News with Tom Brokaw, Today and Meet the Press. She is a frequent guest on PBS' Washington Week in Review which is moderated by Ken Bode, John D. Hughes University Professor at DePauw.

Prior to joining NBC News, Ifill was a well-respected national reporter for the New York Times. She joined the Times as Congressional correspondent in 1991 and began covering the Clinton campaign. Later that year she was named a White House correspondent after President Clinton took office. Previously, Ifill worked for the Washington Post for seven years, writing about the 1988 political campaign and the scandals at the Department of Housing and Urban Development. She also covered local and state politics on the metropolitan staff of the Post. From 1981-1984, she worked at the Baltimore Evening Sun. Before that she was a general assignment and education reporter at the Boston Herald American.

Ifill has traveled extensively throughout Europe, the Caribbean, North and South America. A native of New York City, Ifill received a B.A. in communications at Simmons College in Boston in 1977 and was awarded an honorary doctorate in journalism in 1993.

Ifill's visit is part of a series of speakers on race issues that DePauw is scheduling throughout the 1997-98 academic year. Speakers so far in the series have been Bill Bradley, former senior U.S. senator from New Jersey, and Roger Wilkins, journalist, author, professor and attorney. Upcoming speakers include Jonathan Kozol, popular author of books on education and social justice, on November 11.