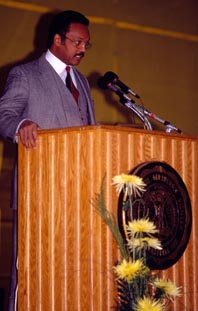 December 3, 1992, Greencastle, Ind. - The Reverend Jesse Jackson, president of the National Rainbow Coalition, raised the level of conversation on race relations both in the nation and at DePauw as he delivered the Timothy and Sharon Ubben Lecture to a full house in the University's Neal Fieldhouse. In his speech, "Rebuild America, Keep Hope Alive: A Post-Election Analysis," Jackson spoke of President Bill Clinton's New Covenant and stressed that a covenant need two signatures, one of the leader and one of the people.

America must move from the politics of exclusion to a system that promotes and celebrates inclusion, Jackson told the crowd. He noted that 10 million people in this country are unemployed, 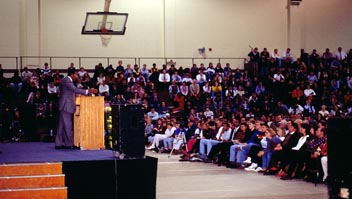 another 17 million are underemployed, and 40 million Americans live in poverty and lack health insurance.

Jackson challenged DePauw students to help move the nation "forward by hope and not backwards by fear, to make a high moral choice at the crossroads."

What the nation requires is "not a 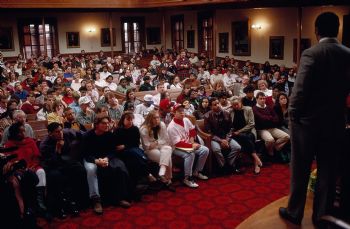 new savior but a new behavior," he told the crowd that filled the large gymnasium. "This struggle comes down to regenerated people, people who have cleaned up their bodies and cleaned up their minds." America, Jackson declared, needs to achieve "unity beyond color and culture" through equality of care. (at right: Rev. Jackson meeting with students in Meharry Hall of DePauw's historic East College)

"We must not swap pain for pain or hate for hate if we are to get better," he asserted. "An eye for an eye and a tooth for a tooth will make us all blind and disfigured. I submit this to you: At some point forgiveness and redemption must be circuit breakers in the cycle of pain."

In an open forum in Meharry Hall of historic East College, Ken Bode, 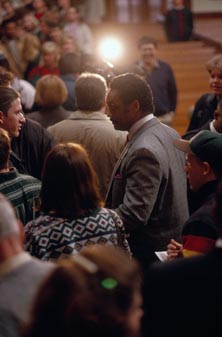 director of DePauw's Center for Contemporary Media, introduced Jesse Jackson as someone he had known for 30 years. Bode said he watched Jackson grow in experience, acumen and statesmanship through his two presidential campaigns and other activities, stating, "Jesse Jackson has inspired people from the grassroots to the very top of this country."

Jackson told students at the forum that the nation's youth is its "redemptive element," and used the example of a young Dr. Martin Luther King coming to the aid of Rosa Parks. "For the right to vote, young people of this country have marched and died," he said. "The civil rights movement was a multicultural, multiracial movement."

In addition to his Ubben Lecture and the open forum, Jackson had lunch with 24 DePauw students and faculty members.

Jesse Jackson is considered one of America's foremost political figures. During he past three decades, he has played a major role in virtually every movement for empowerment, peace, civil rights, gender equality, economic and social justice. He has been called the "conscience of the nation" and "the great unifier," challenging America to establish just and humane priorities and bringing people 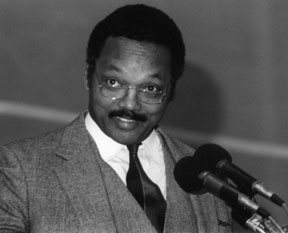 together across lines of race, class, gender and beliefs. Years before they became popular issues, Jackson advocated national health care, a war on drugs, dialogue with the Soviet Union, and negotiations in the Middle East. His strong stand against apartheid in South Africa in 1984 made it an issue of national conscience.

His two presidential campaigns -- in 1984 and 1988 -- broke new ground in United States politics. As a highly respected world leader, Jackson has acted many times as an international diplomat in sensitive situations.