[Download Audio: "The Post-Election Challenge" - 517kb] "are likely to need extraordinary diplomacy, hand-holding, reaching across the aisle, and likewise a public that supports that and understands that." Lugar, the longest-serving United States Senator in Indiana history and chairman of the Senate Foreign Relations Committee, presented The Timothy and Sharon Ubben Lecture, "A Changing World," in Meharry Hall of historic East College this afternoon.

He discussed the challenges that await the president and Congress once the votes are counted; issues that Lugar says will affect many of today's college students for many years to come.

"During an election campaign I can appreciate that people are in the trenches and they're isn't a great desire for a lot of hand-holding and that type of thing," he told his DePauw audience. After the election becomes a part of the nation's history, "if we're still in trenches demanding that our president, or our senators, or our members do this or that... this may be difficult to bring about the governance that we think we need."

The Republican says tough choices will have to be made very soon with the United States facing record deficits in both the domestic budget and foreign trade, and "baby boomers" reaching retirement age and straining Social Security.

[Download Audio: "Insoluble Problem" - 415kb] "The fact is that we have a medical miracle and an insoluble problem," Lugar stated. 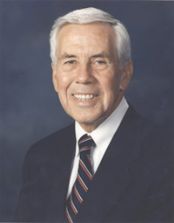 To the extent we discover more and more miracle cures for whatever ails us, we are all likely as a whole to live a lot longer. And initially, each of these procedures -- whether it be a new drug or a new surgical procedure -- will be expensive, and in a democracy each of us will demand it as citizens of equality. And the expense of this will go up. It will go up in a big way."

[Download Audio: "What Gets Squeezed?" - 641kb] "At some point, we accept the fact... that a much larger portion of our gross national product will be spent on medical care in one form or another, as opposed to something else. But what else? What gets squeezed in the process? Is it highways? Or is it education? Is it homeland defense? Is it the armed services? In essence, there are finally only so many dollars in this situation and without ingenuity, as we try to think how to expand this pool -- either through our own entrepreneurship or through our foreign trade -- we have sort of a constricted playing field. All of this sort of lies ahead of the next president and the next Congress and all of us."

Richard Lugar, who was first elected to the U.S. Senate in 1976 and won a fifth term in 2000, addressed today's news reports that the Chief Justice of the U.S. Supreme Court, William Rehnquist, is being treated for thyroid cancer. The current high court is generally split by a 5-4 vote along conservative and liberal lines. Rehnquist is one of four justices over the age of 70, and 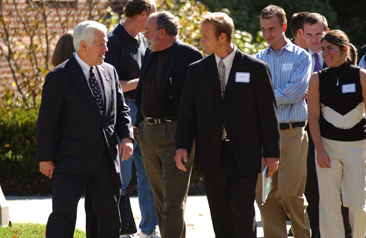 recent nominations by President Bush to lower court vacancies have been met by strong Democratic opposition.

"Never before have judicial nominees been filibustered," Lugar said. Given that, he added,

[Download Audio: "Confirming A Justice" - 333kb] "I don't know who in America right now would qualify as a Supreme Court justice, who, in fact, finds sort of a happy meeting with senators and a confirmation. We all pray for Justice Rehnquist... It illustrates that we are on the threshold, I think, of another story or series of stories that will test our mettle as Americans."

Lugar -- who received an honorary degree from DePauw in 1972 and the McNaughton Medal for Public Service in 2001 -- also responded to today's report from the head of the International Atomic Energy Agency that 380 tons of high explosives are missing from a weapons dump in Iraq and disappeared sometime after April 9, 2003.

[Download Audio: "Missing Explosives" - 279kb] "I've been very critical of the planning before the war [and] planning after the war... We've had not endless hearings

but 23 on Iraq illuminating this territory, and the facts of the matter are that we did not have enough personnel in Iraq to go after these arms, known or unknown to anybody."

[Download Audio: "Ambassador Bremer's Remarks" - 457kb] "I think Bremer's talk here, as all of you have seen subsequently, came as a surprise to the rest of the nation... the DePauw lecture was quite an event." While Bremer says he pushed for more troops in Iraq from the beginning, Lugar says, "When I saw him in June [2003], two months after the hostilities [formally ended], he was not talking... about more soldiers, even though we were raising all kinds of questions."

While more security forces are still needed, sending more American troops to Iraq at this juncture would not be wise, Lugar told the crowd of students, faculty and others who gathered on the first day following DePauw's fall break. 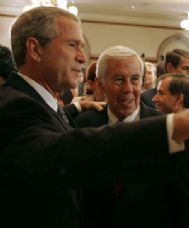 at the least at this point... would resent our bringing in huge additional troops. The sad fact is that Americans are not liked by Iraqis at this stage, for a variety of reasons. We are tolerated but, at the same time, to bring on more troops is to simply antagonize further even those persons who are working rather constructively in the new fledgling government and with the new constitution, and so that does not seem advisable."

Getting more allied forces to chip in on this and future military operations is also problematic, Lugar says.

Senator Lugar, who signed copies of his newly re-released book, Letters to the Next President, at the DePauw bookstore after the Ubben Lecture, was accompanied by two DePauw alumni who serve on his staff, his state director, Lesley Reser '83, and Emmy Huffman '02, who works on the veteran's history project. Lugar also had lunch with DePauw President Robert G. Bottoms' leadership class, and met with several students who have recently interned in his office.

[Download Video: "Sen. Lugar on DePauw" - 1331kb] "I really treasure each of these opportunities," Lugar said. "DePauw University means so much to us to each of us in Indiana in terms of its history, but importantly,

the important leadership" its alumni provide throughout the state and nation.