[Download Audio: "Escaping the Trap" - 253kb] "It's not about Harvard, it's not about a prestigious school," says Liz Murray of her incredible and uplifting life story, which she shared with an audience at DePauw University tonight. "It's not about that. It's about learning, about educating yourself and gathering enough knowledge to find your way through any little crack or crevice you possibly can so you can move up and escape from that trap you were born into."

The 24-year-old Murray, who went from living on the streets of New York City to winning a scholarship to Harvard University, delivered the Timothy and Sharon Ubben Lecture, "Homeless to Harvard: A Remarkable Journey," in Kresge Auditorium of DePauw's Performing Arts Center. Working without notes and addressing her audience from the edge of the stage, Murray detailed how she was born to drug-addicted

parents, and how as a child, living in squalor, her parents and everyone she knew was living month-to-month on government checks.

[Download Audio: "Childhood Memories" - 270kb] "I didn't even know that people worked when I was younger, 'cause you have to think about -- what does a kid see when they're little. I saw that people cashed welfare checks... they were happy to see the mailman, he was like Santa Claus or something or some celebrity -- and we'd go to the check cashing store and there would be a line wrapped around the block for an hour-and-a-half" on the days checks arrived, she remembered. Her parents would spend the bulk of the money on drugs; about $30 a month was all the family of four spent on food, and Murray's parents would go without food for several days at a time.

Despite the tumultous environment in which she was raised, Murray says she has always loved her parents. Her life, already in disarray, unraveled quickly when her mother was diagnosed with HIV. Her mother moved out, her father went to a homeless shelter, and Murray, then a young teen, was sent to 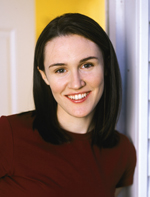 a group home. Her unpleasant experiences there led her to run away and she lived on the streets of New York City, eating out of dumpsters and sleeping at friends' houses or on subway trains, but in her own words, "going nowhere." The year Murray turned 16, her mother died, and her view of life changed.

[Download Audio: "The Turning Point" - 623kb] "I got the sense that my life was in my own hands," she told her DePauw audience. "And I knew that already, but it's different when a parent dies; maybe some of you know what I mean. You look around and strangers become more strange, big institutional buildings look scarier, everything looks more alien, nothing is friendly. There's no person to think about yourself through. It truly is yourself in the world, and that's it. I realized my own isolation and I realized there never would be somebody to kind of filter me in the world. And I went back with my friends, and without having her to think about anymore -- I mean I did, but not the same way -- I sat with them and I realized that I had been falsely relying on my friends. 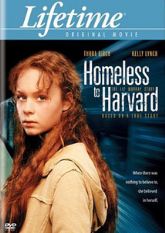 I realized that, at the end of the day, whatever I did or did not do with my life would stick to me, even if I hung out with them."

Murray, whose story is chronicled in the Lifetime Emmy-nominated movie, From Homeless to Harvard: The Liz Murray Story, enrolled in an alternative high school at age 17; when most of the people her age were graduating, she was starting. Guided by an understanding teacher/mentor and fueled by a desire to make something of her life, Murray finished high school in two years while still sleeping where she could find a place to lay her head at night. When she visited Harvard on a school trip, a seed was planted. Murray applied for a New York Times scholarship and was one of six students selected out of the thousands of applicants. A story profiling the scholarship winners was published on the cover of the Times' metro section.

[Download Audio: "Power of the Media" - 341kb] "I really didn't understand the power of the media before that, but I found out," Murray said with a chuckle. "You know [that] New Yorkers have this reputation for being really cold, right? Well, the readers of the newspaper came out of their houses around [the school] and brought me sweaters and clothing their kids weren't using anymore. Some lady came just

to give me a hug! Another came just with some cookies, then she said to me, 'I don't have any money, Liz, but I have a stationwagon and a house. Do you have any laundry?,' she asked me. 'I just want to do your laundry.'" [BONUS CLIP:

Murray's story was featured on ABC's 20/20 and she was a guest of Oprah Winfrey, becoming the first recipient of the talk show host's Chutzpah Award. Murray transferred from Harvard to Columbia University to be closer to her father, who is ill. She had been studying film, but after talking about her experiences in front of audiences

around the nation and the world over the past few years,

[Download Audio: "Reaching Out" - 175kb] "My interests broadened because I realize that I have certain insights based on what had happened to me, and I had this opportunity to share with people and go back-and-forth and maybe draw some meaning out of it." She now has her sights set on a masters degree in sociology and psychology hoping to "understand what creates motivation in a human being and how to apply that in society. Is there a way to create upward mobility? Is there a way to break class differences?," she asked. Murray's ultimate goal is to create a coaching and seminar company that will work with groups, perhaps specializing in inner-city schools.

[Download Audio: "The Future" - 66kb] "Instead of just speaking about my life, I want that to be a footnote, and I want to offer strategies to people."

To view a complete list of past Ubben Lecturers, which includes links to video clips and news stories, click here.