[Download Audio: "Time" - 115kb] "Believe it or not, I have heard from many, many students on many kinds of campuses that one reason that they don't sit around anymore on a blanket with someone they're attracted to -- looking at the stars, getting to know them, falling in love -- is they have no time," says feminist and author Naomi Wolf. In a Timothy and Sharon Ubben Lecture tonight to more than 800 students, faculty members and others in Kresge Auditorium, Wolf discussed "Hooking Up: Sex, Alcohol and the Death of Romance on College Campuses." As Newsweek recently reported, 78% of college students say they have "hooked up," usually after consuming alcohol. 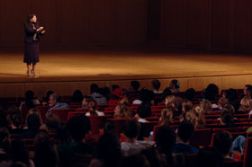 smell of her hair, or the touch of his hand -- but you do have time on Saturday night to get really drunk and have sex with someone. And that's one way, as so many young people have said, of taking care of those needs without taking time away from these huge pressures that face people your age."

Wolf, author of The Beauty Myth, which the New York Times included on a list of the 70 most important books of the twentieth century, offered students a very frank and often humorous examination of the decisions they encounter and the potential ramifications -- physical and emotional -- that they carry with them. 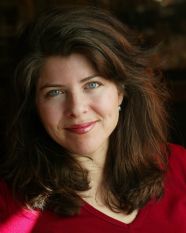 For women, Wolf says part of the problem can be traced back to the way sex education is taught. Women, she asserts, "learn almost nothing about female arousal and orgasm," while the male side of pleasure is covered.

[Download Audio: "Pleasure" - 217kb] "If it's not in your textbook, not only might you have more difficulty locating it in real life, but it's a message to you as a girl about the value or legitimacy that your sexual desire has." Wolf continued, "If you're a woman, did you learn about pregnancy, chlymydia, AIDS, gonorrhea, herpes, separating sores and leprosy? (laughter) So you learned about all the disgusting and scary things that could happen to you if you had sex, right? But did learn anything about pleasure?"

As a result, Wolf believes that many young women tend to feel shame when they're attracted to someone and have libidinous feelings.

[Download Audio: "Compartmentalizing Emotions" - 262kb] "What makes it possible to find some sort of release is to get drunk and have sex with someone you don't know, because if you are conscious and not drunk then you have to be thinking things like -- Do I like this guy?, Is this the right guy?" Wolf added, "If you're conscious and taught to feel so ashamed about your 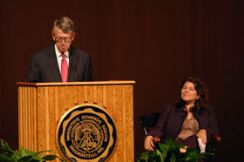 sexuality, all of this anxiety will kick in when you're in a sexual situation, which is so overwhelming that it's easier to get sex with alcohol, is pretty much what it comes down to for a lot of women.  It's easier to deal with it; it's easier to compartmentalize the emotions."

[Download Audio: "Young Men" - 142kb] "are drawn to the hook-up culture because there's nothing in the culture that says to young men that it's okay to say, you know what, sometimes I fall in love... I just feel love, I feel vulnerable, I want this woman and not every other woman."  Although they want to "pair bond" with a woman they've been intimate with, Wolf says young men are chided by friends to "play the field and have fun.  So as girls' feelings make them feel unladylike, mens' feelings are emasculated. 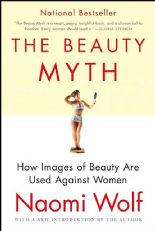 what a nightmare... everyone has to drink a lot in order to tamp down these uncomfortable, improper feelings that they feel.  And we all know what happens -- what the downsides are with that."

[Download Audio: "Healthier Environment" - 76kb] "It was a healthier environment when young men and young women were encountering a human being rather than a technological construct for their first real encounter with intimacy and sexuality."

Wolf -- whose other books include Fire With Fire: The New Female Power, Promiscuities: The Secret Struggle For Womanhood, and the recently-released The Treehouse: Eccentric Wisdom from My Father on How to Live, Love and See -- continued,

encounter... really having, like, thousands of scripts in their head from pornography.  And this has a really profound influence on how young men and women of your generation relate to each other sexually."

A co-founder of The Woodhull Institute for Ethical Leadership, Wolf urged her audience to "be conscious, be honest, and be kind" in all relationships.  She spoke of mistakes she had made in her own life, and said they haunt her to this day.  The Yale graduate paced the stage as she delivered her address, and waded through the crowd during the hour-long question-and-answer session that followed.  Noting that she is "personally on a spiritual path," Wolf told the audience she believes

[Download Audio: "The Inner Spark" - 515kb] "we are all here, every day, to make profound spiritual decisions -- good, evil, destructive, healing -- every minute... So, God doesn't want us to sit around saying, 'Well, Naomi said I should do it this way.' I don't even think God wants us to say 'Pat Robertson said I'm supposed to do it this way.' Honestly, I think God wants us to think for ourselves using our hearts, our conscience.  Every religion has a notion of a spark 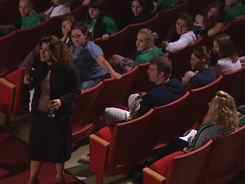 of God inside people... that spark in you knows what to do in a sexual situation, knows if it's right for you or wrong... because it's talking to you."

But Naomi Wolf did have one request for DePauw students as she concluded her Ubben Lecture, one that she called

[Download Video: "The Speaker's Request" - 1473kb] "very subversive to the culture at large... When you leave here, ask someone for a date.  Send someone a letter, send someone flowers. Boys, girls... invite someone to sit on a blanket with you and look at the stars," she said to applause.

Naomi Wolf arrived on the DePauw campus in the afternoon, and participated in a forum with students and 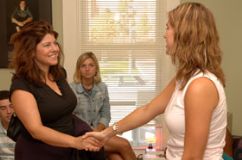 members of the faculty. At that session, she said that while college-age women learn about the "structural oppression" they face in the world, it's important to

[Download Audio: "Agents of Change" - 79kb] "learn your own strengths and freedoms and capabilities and ability to be huge agents of change in the world."

[Download Audio: "National Reputation" - 51kb] "I've heard for years about DePauw.  It's got a wonderful reputation across the country, but I've never had the pleasure of being here before," Wolf told the afternoon forum before visiting the DePauw Women's Center (seen in photos).

[Download Audio: "A Transformation" - 193kb] "I've gone from Manhattan this morning to Greencastle, Indiana this afternoon, and it's like in The Wizard of Oz when you go from black-and-white to 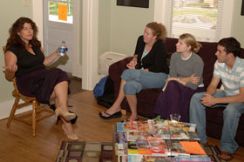 color," the author said of arriving on the DePauw campus. "I went for a little walk... and people kept saying, 'No, after you, after you'; 'I want to use the computer,' 'Here, it's free, sit down... would you like some more free iced tea'... It's like, when is someone going to jostle me, when is someone going to try to take my place in line?  I'm kind of disoriented, in a nice way."

The Ubben Lecture Series has brought distinguished individuals to DePauw University since 1986.  The next speaker will be former Soviet President Mikhail Gorbachev, who will visit the Greencastle campus on Thursday, October 27.  Read more in this previous story.

In March 2003, DePauw University launched the Coalition for a Responsible Community, an effort to curb alcohol abuse and related behaviors that involved all DePauw constituents -- students, faculty, alumni and administrators (read more here).  The group's work resulted in a community covenant for DePauw: a set of expectations for members of the University community: in essence, stating the expectations for those who choose to live in the DePauw community (read the covenant by clicking here).  Additionally, The Genesis Group -- a coalition of 46 national and international fraternities and sororities dedicated to finding solutions to the persistent problem of binge drinking among college students -- selected DePauw University as one of two test sites for its Program For Change (read more here).