"We Retain the Power" to Make The Wal-Mart Effect a Greater Force for Good, Author Charles Fishman Says in Ubben Lecture 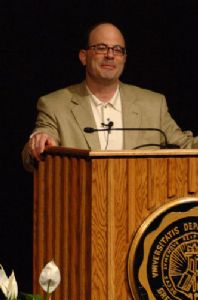 [Download Video: "The Wal-Mart Effect" - 1331kb] "Wal-Mart has changed the world," investigative journalist and author Charles Fishman declared at DePauw University. "The consequences of Wal-Mart's way of doing business now have begun to be corrosive; partly because Wal-Mart is unrelenting -- Wal-Mart never says, 'OK, the price is low enough' -- and partly because of Wal-Mart's scale." Fishman, whose The Wal-Mart Effect: How the World's Most Powerful Company Really Works -- and How It's Transforming the American Economy is one of the nation's best-selling business books, presented The Timothy and Sharon Ubben Lecture in Kresge Auditorium.

[Download Audio: "Two Important Questions" - 636kb] "I had the chance to talk to your president tonight for about an hour," Fishman told his audience of DePauw students, faculty and staff members, alumni and citizens of Greencastle. "And one of the things Dr. (Robert) Bottoms said is that he hopes that students at DePauw... don't end up graduating without 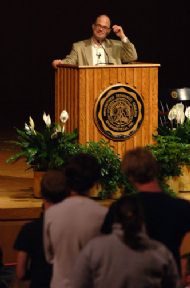 A senior writer at Fast Company magazine since 1996 and a former Washington Post reporter, Fishman noted,

Fishman described in detail how Wal-Mart has succeeded at delivering consistently lower prices than its competitors and, in the process, become the world's largest retailer and largest company. An "irrelevant" player in the grocery business in 1990, when it operated just 9 stores, Wal-Mart became the #1 seller of groceries in the United States by 2000 and today accounts for about 20% of the groceries sold in America at its approximately 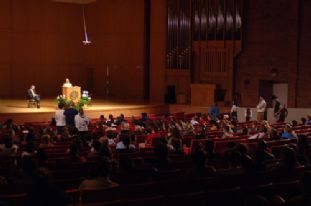 The beneficiaries of a new Wal-Mart store are local shoppers, Fishman asserts. Grocery prices at all stores -- Wal-Mart and its competitors -- fall 15% when the giant retailer moves into a town, and that amounts to the equivalent of seven weeks of free groceries per year for the typical family.

The author also told of how Wal-Mart saved countless forests, acres of landfill space and shipping fuel -- and consumers money -- by demanding that suppliers stop shipping deodorant in cardboard boxes. The packaging, as Wal-Mart successfully argued, was tossed away immediately as consumers opened the product and was wasting valuable shelf space and the aforementioned resources.

[Download Audio: "Helping to Save the World" - 393kb] "That, to me, is a perfect example of how Wal-Mart can use its scale now to change the world again... to help save the world," Fishman says. "Wal-Mart has changed the world dramatically. I'm the first person to say -- in fact, I think I often say it, and this is 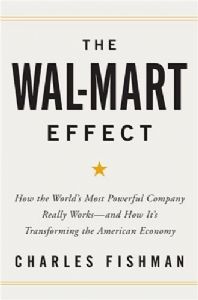 immodest, but I express it more vividly and persuasively than Wal-Mart, the good that Wal-Mart has done for America. I don't think it can be underestimated."

Speaking just 2.1 miles from Wal-Mart #902 -- Charles Fishman told the crowd he'd used an online mapping program to discern how close DePauw's Performing Arts Center is to the Greencastle Wal-Mart (which he hoped to visit before leaving) -- the address also probed the other side of the "Wal-Mart Effect." Fishman told the tale of a woman in Bangladesh who worked 10-12 hours a day in a factory that makes Faded Glory jeans for Wal-Mart. Her job requires her to sew 120 back pockets on jeans per hour. When she falls short, Fishman says the woman has been subjected to beatings from her bosses, administered with the very apparel that she works long hours to create for a salary that doesn't provide enough for her to buy a toothbrush for herself.

And what happens to the jeans?

[Download Video: "Disciplinary Tool" - 2522kb] "Those pants were pressed and folded and put in the shipping container and sent to the United States and hung on the apparel racks in Wal-Mart," the Ubben Lecturer says. "Which means that somewhere some Americans are walking around wearing Faded Glory pants that were used to beat the people that made them. There are many cultural differences in the world that we are just beginning to appreciate as 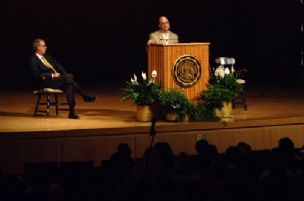 the economy gets more and more global, but I don't think we want to wear clothing that was used as a disciplinary tool -- as a club -- against the people who made it."

Fishman also talked of how salmon, which sold for $32 a pound when he was growing up, is now available at Wal-Mart for an everyday low price of $4.84. How? The author says the fish is raised in Chile in polluted marshes and less-than-ideal working conditions.

[Download Audio: "Thinking Globally" - 294kb] "However much we benefit from low prices and like low prices and have come, in some sense, to rely on low prices, we do not need clothing that is so inexpensive that the people who make it can't afford a toothbrush. Again, many cultural gaps, but I think we can agree that that's not a civilized way of running the global economy."

The subject of a lengthy feature in last Thursday's Washington Post, Charles Fishman 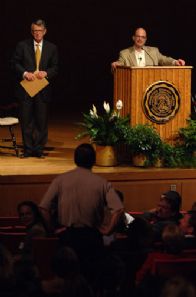 says there are signs that Wal-Mart is "starting to get the message" and has recently announced several initiatives designed to improve its business practices. Among them,

Returning to the question he offered at the beginning of his speech, Can Wal-Mart Save the World?, Charles Fishman declared,

[Download Video: "Changing the Culture" - 1423kb] "Just as Wal-Mart has changed the way goods are manufactured and warehoused and distributed in this country, because of its market power and because of its focus Wal-Mart can change the way food is raised or people are treated around the world, in exactly the same way."

The Wal-Mart Effect examines how the retail chain touches the life of each American, even those who don't go near one of the eight-acre supercenters, through 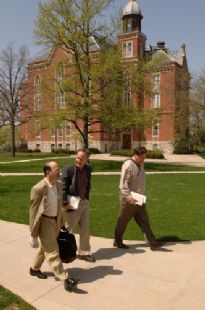 personal stories, statistics and analysis. Fishman says Wal-Mart has become the business superpower it is today by pricing its products pennies below its competitors, and maintaining the price advantage.

[Download Audio: "We Have the Power" - 929kb] "So all of Wal-Mart's power in the economy has been created by our willingness to change our behavior to get the $3 item for $2.87," he told his DePauw audience. "All of Wal-Mart's power comes from that thirteen cents. It comes from us... and that's what's really important, because we retain the power. If we don't like how Wal-Mart, or any other company, in fact -- perhaps except Halliburton -- behaves, we can have a dramatic impact on that company by, first of all, changing our own shopping behavior, by saying, 'I don't like the consequences of the way you do business. I'm going to do business with somebody else." (at left, l-r: Charles Fishman walking with Ken Owen '82, director of media relations and Gary Lemon, professor of economics)

The Wal-Mart Effect, good and bad, is powerful. Fishman says because Wal-Mart keeps prices low, competitors have to stay close. Wal-Mart's efficiencies and distribution models are also emulated by others. So,

Earlier in the day, Charles Fishman engaged in a discussion with students and faculty members and held a session with DePauw student reporters (seen below right), and revealed that 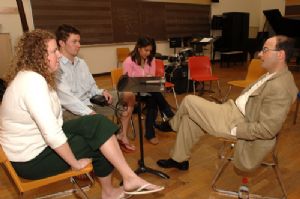 he has been invited to visit with Wal-Mart executives in Bentonville, Arkansas next week. That's an about-face for the company, which refused to cooperate with the author when he was working on the book. At that event, and in his Ubben Lecture, he was asked about Wal-Mart's new test store in Plano, Texas. There shoppers can peruse 700 premium wines, gourmet cheeses, and sushi.

[Download Audio: "Climbing the Ladder" - 487kb] "Wal-Mart has spent the last 40 years teaching us that Wal-Mart is about price, is about low price," Fishman said in response to a DePauw student's question about the new store. "I don't know of a company that has gone up the ladder in value; that has started as a low cost company and turned itself into a sort of Starbucks or Lexus or BMW. That's very hard to do. There are many examples of companies that have lowered themselves to try and broaden their appeal to a wider audience. It's much harder to move up the value chain, in fact." 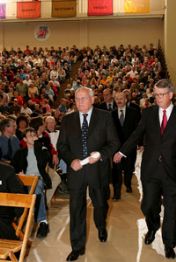 about the people who've stood up here and talked before me -- Mikhail Gorbachev and Margaret Thatcher -- I'm definitely above my pay grade here," he said to laughter from the audience.