July 11, 2006, Greencastle, Ind. - "Men have to be willing to care about the way boys are being treated, taught, and cared for in this country and advocate for them," writes Tom Chiarella in Esquire. Chiarella, professor of English at DePauw University, is a contributing editor for the magazine. In the July issue, he examines "The Problem with Boys."

The professor -- author of the books Foley's Luck, Writing Dialogue and Thursday's Game: Notes from a Golfer with Far to Go -- argues that the problem 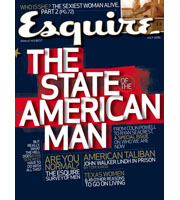 is not boys, but men. He calls on men to "be in the schools -- at the PTA meetings, at parent-teacher conferences, in front of school boards, in classes teaching or just talking about their jobs. Young men, men without children, must take a stake and volunteer to coach, to counsel, to read to kids. You can't wait for fatherhood to hit you in the face. Men whose children are grown must mentor a new generation of children. Select two boys, the ones who need it, the ones you know are hurting. Take a lesson from Joel Klein [the chancellor of New York City schools] and convince two more men to do the same. Two more men: That's your assignment."