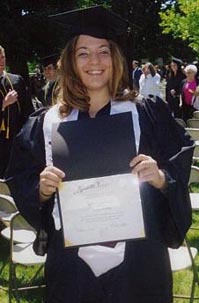 July 14, 2006, Greencastle, Ind. - "A significant milestone took place recently on the quiet campus of DePauw University," begins a story in today's Indianapolis Recorder. The article notes that Jessica Lynn Parks graduated in May and reports, "she followed in the footsteps of her great-great-grandfather, Tucker E. Wilson, who graduated from the same University 118 years ago. Wilson was one of only two African-American students on campus when he enrolled at DePauw [and] in 1888 he became the first African-American to graduate from that University after he earned a bachelor of arts degree," writes Brandon A. Perry.

"He was definitely one of the reasons why I came to DePauw," Parks, who majored in women's studies, tells the newspaper. "It was a great experience learning there, and I did it mostly for him."

Tucker Wilson was a minister in the African Methodist Episcopal Church, serving churches in Indiana, Illinois, Ohio, Pennsylvania and Kentucky until his death in 1925. As a student and as a minister, he was recognized for his pioneering spirit, his gifts of oratory and leadership.

years ago by naming one of the duplexes on campus after him. It adds, "Every year, the Association of African-American Students at DePauw has a Tucker Wilson series, where forums, lectures and activities are held to discuss black history. Parks was asked by excited classmates to help organize events for the series. 'That really was one of the most honorable moments during my years at DePauw,' she said with a smile in her voice."