September 8, 2006, Greencastle, Ind. - In the wake of the terrorist attacks of September 11, 2001, "America was then distracted by the phony arguments and pumped up intelligence about Saddam Hussein, Iraq and nonexistent weapons of mass destruction," writes Ken Bode, Eugene S. Pulliam Distinguished Visiting Professor of Journalism at DePauw University. "Last weekend the toll of U.S. military killed in Iraq quietly passed the 2,973 who died in the 9/11 attacks, and that country has become the incubator for international terrorism. Afghanistan, for all the talk of its democratically elected government, has resumed its role as heroin provider to the world, and is now a country where al-Qaida, the Taliban, the warlords and drug lords have all morphed together."

Dr. Bode's column, published in today's Indianapolis Star, notes that CNN will replay its coverage of the events of 9/11 on Monday. A former CNN senior political analyst, the professor writes that as you watch the playback, "your mind might go to the many things we did not know then, but do now. Among them, remember the FBI field report, ignored by superiors, which said there were Arabs enrolled in 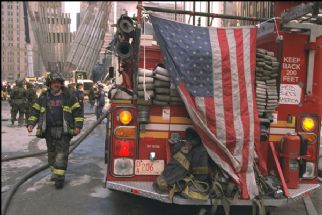 U.S. flight schools, taking lessons on how to fly jetliners but not how to take-off or land them. There was also the famous intelligence memo, sent to Bush as he vacationed at his ranch in August 2001, bearing the headline, 'Bin Laden Determined to Attack Inside the United States.' Of course, we learned later that the manifests of the hijacked airlines contained names known by the FBI to be al-Qaida operatives. Finally, we know now that shortly before 9/11 bin Laden told a Saudi associate, 'The coffin business in America will be expanding soon.'"

The column continues, "Then there are the things that seem unimaginable. For example, we knew with fair certainty that bin Laden was in a cave in a region of Afghanistan called Tora Bora, existing under the protection and patronage of the Taliban regime. The administration made the correct decision to invade Afghanistan, but somehow Osama got away. In his autobiography, Gen. Tommy Franks says we had him surrounded and he just walked out. The felicitous collateral effect of our invasion was the Taliban's destruction in Afghanistan -- or so we thought."

later, bin Laden remains at large. Professor Bode concludes his op-ed by citing the new book by CNN terrorism analyst Peter Bergen. "The Osama bin Laden I Know gathers the recollections of associates who knew the Saudi from before he became the world's most famous jihadist. Bergen says bin Laden's tapes are the most widely circulated political tracts in history, distributed by jihadist Web sites. 'Five years ago there were 12 jihadist Web sites,' says Bergen. 'Today there are 5,000.'"