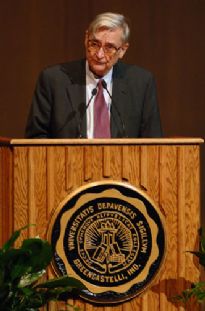 [Download Video: "E.O. Wilson at DePauw" - 1222kb] "The twenty-first century is destined, in my opinion, to be the century of the environment," biologist and two-time Pulitzer Prize-winner E.O. Wilson said at DePauw University tonight. Wilson, professor and curator of entomology at the Museum of Comparative Zoology at Harvard University, presented a lecture in the Performing Arts Center's Kresge Auditorium.

"Biodiversity, which took over 3.5 billion years to evolve, is being eroded at an accelerated rate by human activity," Dr. Wilson declared. "The loss is -- if not abated and halted -- going to inflict a permanent, heavy price in wealth and security," he said. Wilson's appearance was presented by the Timothy and Sharon Ubben Lecture Series in conjunction with the Blair A. and Teresa Reith Fund in support of the Science Research Fellows program, the department of biology's Hickman Lecture Series, and the Commons Project, an initiative supported by the Metanexus Institute on Religion and Science. 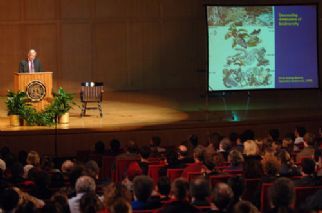 Called "the new Darwin" by Thomas Wolfe, E.O. Wilson is a legendary figure in the fields of entomology (the study of insects), animal behavior and evolutionary psychology, island biogeography, biodiversity, environmental ethics, and the philosophy of knowledge. His books include the bestseller, The Future of Life, as well as The Creation: A Meeting of Science and Religion, which was published in September.

In his DePauw lecture, aided by charts and other visual aids that were projected on a large screen, Wilson issued a sober warning about the consequences of

[Download Audio: "The Damage Done" - 464kb] "the accelerating destruction of the natural environment, leading to mass extinction of ecosystems and species. And the damage already done cannot be repaired within any period of time that has meaning to the human mind." The professor noted, "After the five great mass extinctions that have 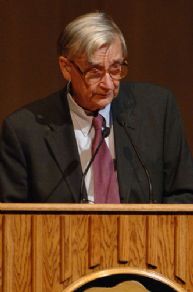 occurred -- recorded in the fossil record over the past 450 million years -- after each one it took 5 and 10 million years for evolution to restore the full flower of biological diversity that existed on the Earth before then. We're now beginning the sixth, by our own hand."

A recipient of the National Medal of Science and announced last week as a winner of the TED Prize, along with former President Clinton, Wilson asserted,

[Download Audio: "The Central Problem" - 274kb] "The central problem of the new century, in my opinion -- the one that's going to count for the real long term, the one that in many ways is transcendent over the problem that are occupying us today, day-to-day -- is how to raise the poor to an endurable quality of life while preserving as much of the natural world as possible."

Wilson says world's poorest people and biological diversity are concentrated in developing countries. "The solution to the problem has to flow from the recognition that both depend on the other," he told his DePauw audience. The impoverished "have little chance to improve their lives in a devastated environment... Conversely, the natural environments where most of biodiversity hangs on, and where so 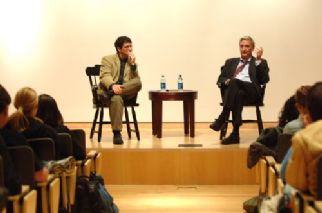 many of these poor are located, cannot survive the press of land hungry people who have nowhere else to go."

The professor, who met and talked with DePauw science students during the afternoon (picture at right shows Wilson with Jim Benedix, associate professor and chair of biology), described how little we really know about the world's living organisms, many of which have not been identified and can play a role in future scientific and medical discoveries. Yet, the "fabulous diversity" found in places such as tropical rainforests is being compromised and wiped away each day.

[Download Audio: "Losing Nature" - 201kb] "If you reduce, for example, the area of a habitat, like a forest or a lake, by 90% -- then we'd only have 10% left, which is not uncommon around the world -- you reduce the number of species that can live there... sustainably, by one-half. And that's what's happening all around the world."

Dr. Wilson displayed images of creatures that are now extinct, and described how the world's "biodiversity 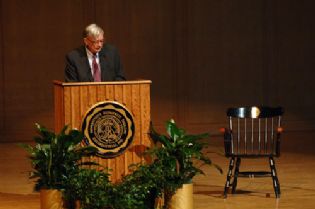 hotspots" comprise just 2.3% of the earth's land surface, yet are the exclusive homes of about 40% of all species and plants in the world. He says if you add in the core areas of the remaining three tropical forest wildernesses, 70% of known species would be covered. Wilson says, several years ago Conservation International estimated a one-time payment of $30 billion would effectively put an "umbrella" over those areas and protect them. "That's one part in a thousand of the world domestic product, annual product. In other words, all the production of the world, take one-thousandth of that and you could make a huge step forward. And yet the $30 billion is not yet forthcoming."

[Download Video: "Judson Green" - 1533kb] "a lot of significant donors are contributing to the solution, including some of corporate leaders. One of them is Judson Green, benefactor 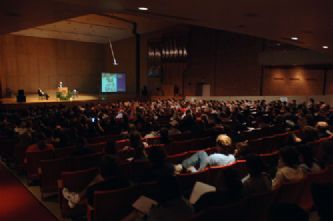 of DePauw, with whom I work on the Conservation International board of directors and who has not only provide support for this major effort but also expertise."

Green is president and CEO of NAVTEQ Corporation and a 1974 graduate of DePauw University. A current member and past president of DePauw's Board of Trustees, Green and his wife Joyce Taglauer Green '75 provided the major, $15 million gift that is allowing for an expansion and renovation of DePauw's Performing Arts Center, the very building in which Wilson delivered his address.

While bemoaning the lack of attention paid to environmental matters by the nation's current and immediate past presidents, Wilson believes, 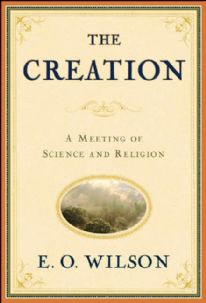 lot. We're getting there. We haven't gotten it going fast enough to get major results, but we know what needs to be done."

Wilson says he offers "the hand of friendship to evangelicals" in his latest book, The Creation: A Meeting of Science and Religion in an attempt to "declare a truce in the culture wars" and save the planet. "Surely," he says, scientists and evangelicals "can agree that each species, however inconspicuous and humble it may seem to us at this moment, is a masterpiece of biology and well worth saving... Prudence alone dictates that we act quickly to prevent the extinction of species, and with it, the pauperization of Earth's ecosystems, hence, of the creation."

Referred to as "our modern-day Thoreau" by Publisher's Weekly, Wilson calls religion and science "the two most powerful social forces in the world today...

[Download Audio: "United" - 224kb] "If religion and science could be united on the common ground of 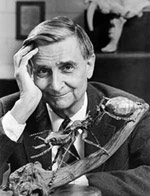 biological conservation, the problem would soon be solved. If there is any moral concept or precept shared by people of all beliefs it is that we owe ourselves and future generations a beautiful, rich and healthful environment."

[Download Audio: "Beyond Calculation" - 371kb] "I hope in this brief time I've been privileged to be with you I've added to the conviction shared by growing numbers of thoughtful people in all walks of life that this is a problem of enormous magnitude that can be solved. The resources to do it exist. Those who control them have many reasons to achieve that goal, not least their own security. The technology exists, the cost is not high. And the benefits -- let me repeat this -- the benefits are beyond calculation as we do it."

[Download Video: "A Matter of Ethics" - 1719kb] "This decision we make will be an ethical decision; it has to have a religious 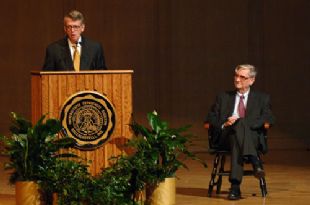 intensity, one of the reasons for appealing to the religious community." He continued, "A civilization able to envision God and an afterlife and to embark on the colonization of space will surely find a way to save the integrity of this magnificent planet and the life it harbors because it is the right thing to do, it's an ennobling task of our species, it is irenic -- it brings us together."

During a question-and-answer session following his speech, Wilson -- who stayed after his address to greet members of the DePauw community and sign books -- was asked what college-aged people can do on the planet's behalf. He called for a "student movement" to embrace environmental issues, which he maintains, will be difficult to avoid in the years ahead.

[Download Video: "Student Movement" - 949kb] "I find it hard to think of a single profession that students like those at DePauw will choose to go into that are not going to be linked, in some way, to the environment. We need a passion, and we need an intensity, and above all to move into the center stage of public concern." 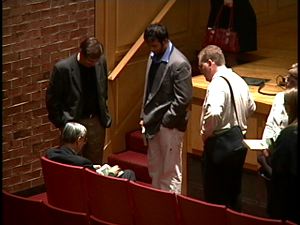