Todd Sturgeon '88 Steps Down as U of Indy Coach; Replaced by His DePauw Mentor, Royce Waltman 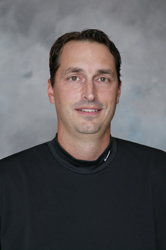 October 2, 2007, Greencastle, Ind. - "Todd Sturgeon said he was watching his son, Connor, at a basketball camp recently when he had a realization: Maybe he'd rather have more time to spend with his own sons than other people's," begins a story in today's Indianapolis Star. "After 10 seasons as the men's basketball coach at the University of Indianapolis, the 42-year-old has decided to step away from the profession, possibly for good," continues the article on Sturgeon, a 1988 graduate of DePauw University.

Sturgeon will be replaced on an interim basis by Royce Waltman (pictured below right), who was DePauw's head men's basketball coach from 1987-1992 and who Sturgeon assisted for four years in Greencastle after he graduated. Waltman, more recently 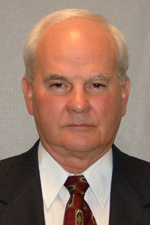 the head coach at Indiana State University, took an assistant coaching job at U of Indy in July.

"It just came down to having young children, the time demands the job requires to do it right and kind of being at the point of my life where I needed to make a decision to be a lifer and coach forever or give something else a try," says Sturgeon, whose sons are 9 and 6. "I wanted to give something else a try that didn't require me to be away from home so much."

Jeff Rabjohns writes, "Sturgeon went 151-126 in 10 season at the Division II school, becoming the first coach in school history to lead the Greyhounds to three consecutive NCAA Tournaments. He has real estate investments and doesn't see himself returning to coaching in the foreseeable future."