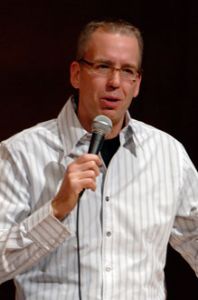 [Download Video: "Finding the Courage" - 1004kb] "I think it's natural to want to hide from the parts of our life that we find confusing or painful, but if we do they'll haunt us forever," the man behind the PostSecret phenomenon told an audience at DePauw University. Frank Warren receives 1,000 postcards a week containing the secrets of strangers and posts the messages on a popular blog and in bestselling books. He says, "If instead we can find the courage to face those parts of our life, maybe through being inspired by other people's stories, we might be surprised to discover a deeper meaning personally for ourselves and a higher purpose in serving others by maybe sharing our life stories with them."

Warren, whose PostSecret.com is the third most popular blog on the Internet, delivered the Timothy and Sharon Ubben Lecture in the Green Center for the Performing Arts' Kresge Auditorium. He described how what began as a regional art project in the Washington, 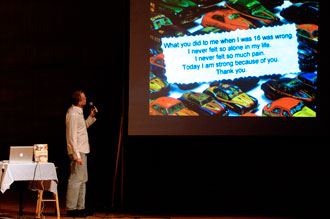 D.C. area three years ago has led to a Web site which has received more than 100 million "hits" and hosts over 3 million visitors every month, has spawned four New York Times bestselling books and has resulted in more than 190,000 secrets being sent in from around the globe. PostSecret is also the subject of current art exhibitions in Baltimore and Canada.

At first, Warren handed out blank postcards in the nation's capital and invited strangers to jot a secret down and mail the card to him. They trickled in, a few a week. Some are humorous, others are introspective or deeply personal and dark. Today, 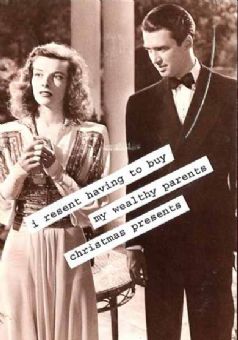 [Download Audio: "A Conversation" - 144kb] "PostSecret has become much more than the sum of its parts," the concept's founder told the audience, which was dominated by DePauw students. "The collection of secrets really almost to me seems like a conversation, not just between the postcards and us, but between the secrets themselves."

Warren says "certain patterns and trends" have emerged in the piles of postcards that have arrived in his mailbox (he has kept each one, incidentally).

[Download Audio: "America's Secret" - 492kb] "And one of the things I've noticed is that I think America has a secret. I receive a lot of secrets about eating disorders, self-harm, suicide, and I don't think you see that reflected in the American culture," he said. "I think if you look at national newspapers or if you watch your local television news you'll see 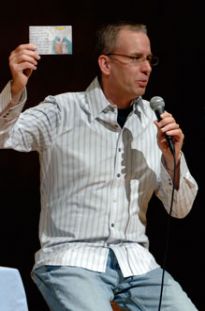 story after story about murders or homicides but very few about suicides. When the fact is, in this country, in the short amount of time I've been talking there's been one murder but two Americans have taken their own lives." Warren and visitors to his blog have raised more than $100,000 for the prevention hotline (800) SUICIDE.

The founder of PostSecret believes there are secrets we hide from other people as well as secrets we hide from ourselves. Sharing them anonomously can relieve a burden for the sender and allow those who read the secret to realize the problems, fears and concerns they have are indeed shared by others. The cards come from addresses that span the globe.

[Download Video: "Greater Unity" - 1734kb] "One of the messages that comes through this project is not the differences between our secrets, but the surprising similarities that tie us together at a deeper level, that you can see through these artistic documents," he says. "It's not unusual for me to get two postcards on the same day from 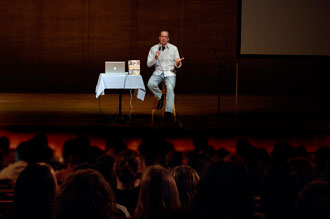 two different continents, written in two different languages, expressing the same desire, or the same fear, or the same hope -- driving home that message about others, this greater unity just underneath all these individual secrets."

PostSecret.com accepts no advertising. Warren says he largely relies on the income from the medical documents business he has owned for years to pay his bills, and worries that commercializing his site would undermine and perhaps destroy the very personal connections that millions of people draw from the cards he posts each weekend.

[Download Video: "The Selection Process" - 808kb] "I usually go through secrets looking for ones that I haven't seen before; secrets that surprise me," he 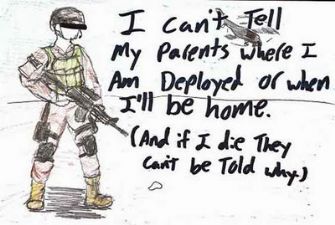 revealed to his DePauw audience. "And I also like secrets that perhaps reveal a common secret that a lot of us share but express it in a new or creative way."

Warren, who ranks #14 on a Forbes list of the 25 biggest, brightest and most influential people on the Internet, has been called "the most trusted stranger in America." He expressed hope that the Web can increasingly become a tool to bring people together in virtual communities. "It allows you the opportunity to have new kinds of conversations with people -- people you know and people you've never met."

[Download Audio: "Using New Technologies" - 290kb] "PostSecret was a very simple idea. And I think there are thousands, or tens of thousands of other ideas just as good or better than PostSecret out there just waiting for one person -- maybe one person in this room tonight -- to have the faith in it and use these new communication technologies to create a project that allows you to reach 100 million 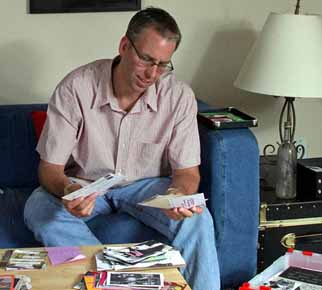 people and reflect back parts of our humanity that often go hidden and unseen."

Following a presentation which included a number of secrets being projected on a large screen, and Warren revealing his own personal secret, the lecturer signed copies of his four books -- including the new A Lifetime of Secrets -- in the Great Hall of the Green Center.

[Download Video: "The Choice" - 880kb] "I think we all have secrets, and I think every day we face a choice to bury them deep inside of ourselves and forget them or to find them and bring them into the light and grow them into something that serves us and serves others as well," Warren said as he concluded his Ubben Lecture. "Free your secrets and become who you are."

The Ubben Lecture Series has brought distinguished individuals to the DePauw University campus since 1986. Ralph Nader spoke in September. Other past Ubben Lecturers have included: Mikhail Gorbachev, 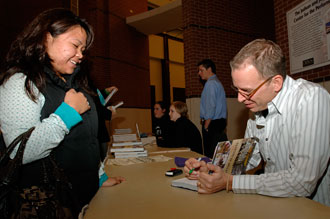 To view a complete list of Ubben Lecturers, which includes links to video clips and news stories, click here. Video montages of many guests are available on YouTube.